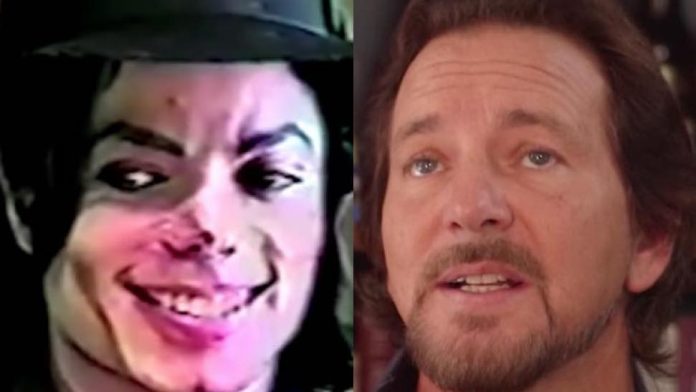 Eddie Vedder discussed Michael Jackson’s Jackson Five at an Ottawa show, as seen below via a PearlJam.com forum recap.

Setlist:
01. Of The Girl
02. Garden
03. Alright
04. Nothing As It Seems
05. Low Light
06. Given To Fly
07. Do The Evolution
{We all agree Neil Young is one of the best people on the planet. Not surprising he is from Canada. We have toured with him and made a record with him….}
08. Throw Your Hatred Down
{Ed talks about not getting to see the Jackson Five when he was young. He is glad that a cool dad brought his kid to the show.}
09. Wishlist/Waiting On A Friend-(Jagger, Richards)-40 second tag
10. Dance Of The Clairvoyants
11. Even Flow
{Ed lets everyone know how annoying it is to sing “Happy Birthday” when working at a busy restaurant. He feels similar while working on stage but two members of the crew have birthdays today and yesterday so he acknowledges them. And he mentions Kim who first saw the band thirty years ago and has spent the last twenty years as nurse.}
12. Seven O’Clock
13. Corduroy
14. Immortality
15. Black
16. Jeremy
{In Quebec Ed shared wine with someone named Ashley who had a lot of positive energy. Ed looks for them in the crowd tonight and once found Ashley is invited to hang out offstage. He even plays a little song about Ashley Moon will be here soon. Ashley had been dealing with some painful things and was still a beacon of positive energy that Ed noticed.}
17. Porch

Encore Break
{Talked about the Taylor Hawkins tribute and what kind of person Taylor was and how wonderful it was to see Taylor’s son play drums at the tribute with the Foo Fighters. He also mentions Gord Downie}