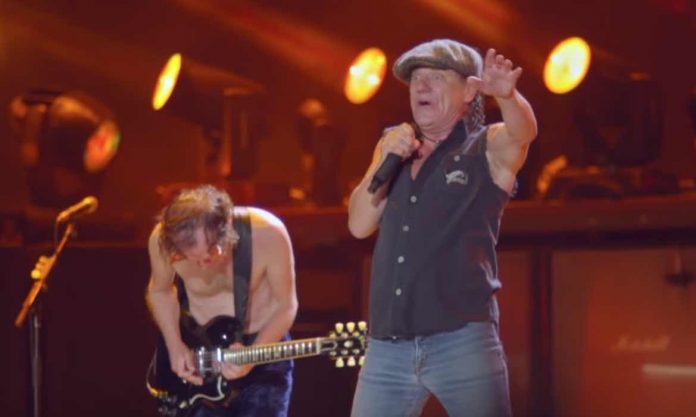 AC/DC rumors have been swirling ever since Brian Johnson, Phil Rudd, and Cliff Williams were photographed in a studio late last year in Vancouver. Brian Johnson made a stunning announcement yesterday with big names like Robert Plant. Now, Hey-Alex.FR are reporting a show in France could be in the works for 2020, and that a late 2019 (November/December) new album release are rumored.

“Many clues prove the return of AC/DC. Three years after their last concert in Marseille, will France again welcome one of the best long-awaited rock band in 2020? The return of AC/DC is announced everywhere, but validated nowhere. Should we believe it? Fans are asking the question, and we will try to answer it with several clues.”

“If you have followed well, you must be aware that our dear Brian Johnson seems to be back in the AC/DC adventure. On the sidelines since he was diagnosed with deafness problems, the singer is apparently back in the group . One thing is certain, if the band goes on tour, it will not be with Axl Rose as in 2016, but with Brian (phew!).”

The article later states, “The confirmation of Zegut. All rock fans know Tonton Zegut and his good tips on bigger bands. Having already announced Metallica, Rammstein or Iron Maiden, he recently posted an article that swept the fans. A few days ago, Zegut, once again, dropped a headline ‘AC/ DC France 2020?’. Everyone knows, our dear Tonton Zegut is only rarely wrong. So believe us, their return is near!

In conclusion, many clues confirm the return of the mythical group AC / DC on stage ! A new album will certainly be released in late 2019 as a tribute to Malcolm Young. And a tour will follow with Brian Johnson. And the best news is that the Stade de France will host the band for one or more concerts in 2020!”

A “reliable source” that is “close with the AC/DC camp ” told V100 that AC/DC’s upcoming tour will include singer Brian Johnson, who exited in 2016 due to hearing issues. “It’s been rumored for months now that he’s been working with the band and we’ve been told those rumors are true,” the station said. “Brian has been working special in-ears made for his performances so that he can continue to perform without causing any more damage to his hearing than he already has.”

Guns N’ Roses guitarist Slash revealed a sad photo of Bon Scott on what would have been his 73rd birthday nearly 40 years after his death on Tuesday. Bon Scott was found dead in a car in February 1980 at the age of 33, with the official cause of death being listed as ‘acute alcohol poisoning’ and classified as ‘death by misadventure.’ A new AC/DC album and tour with Brian Johnson, Phil Rudd, and Cliff Williams back in the band is rumored.