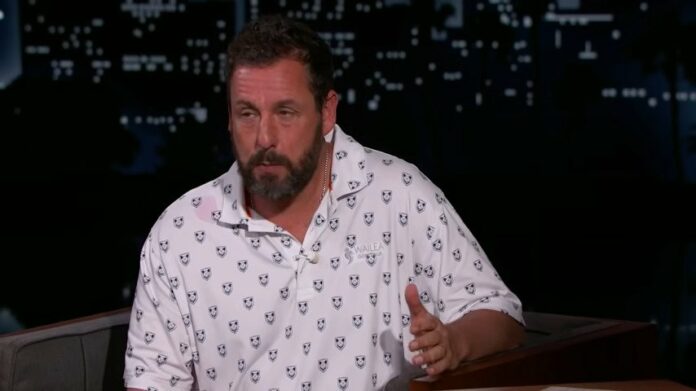 Adam Sandler has been a part of the childhoods and memories of so many that have grown up during or remember the 1990s well. From his hilarious and memorable time as a main cast member on Saturday Night Live where he would entertain audiences with such beloved characters like Opera Man to his comedy blockbusters such as Billy Madison, Happy Gilmore, and The Waterboy that are still completely relevant to this day in 2022. Adam Sandler’s career completely speaks for itself.

During a recent appearance on Good Morning America, while promoting the new sports film ‘Hustle’ which comes out this week, Sandler discussed why he happened to be sporting a black eye on his face. Sandler first appeared to have the shiner during an appearance on a Livestream that he took part in. A photo of the black eye can be seen below

Meanwhile, on Good Morning America, the ‘Hustle’ actor would give a rather complicated story on how the black eye came to be, explaining to host George Stephanopoulos that he was the recipient of the black and blue mark after kicking himself in the face while trying to untuck his bedsheets sot to retrieve his mobile phone. Sandler would state on the program the following. Credit to ThirstyForNews for the following quote.

I refused to acknowledge it. I felt blood and said, ‘Ah, something is going on, but I got to sleep.’ Kept sleeping, woke up… There’s nothing cool about this thing. It looks so cool. When I’m on the streets of New York, like, I see people going, ‘Oh, OK. He likes to fight, that guy.’ I’m like, ‘Ah, it was a bad accident.’

For his part, Stephanopoulosm, the co-anchor for Good Morning America seemed rather befuddled over Sandler’s explanation as he would proclaim it to be “the most elaborate black-eye story he’s ever heard.” Adam Sandler’s new film ‘Hustle’ officially releases on June 8th.