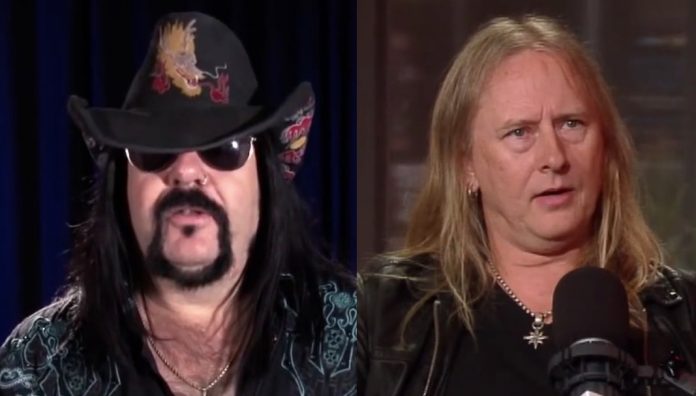 Alice In Chains have shared a heartfelt tribute to Pantera drummer Vinnie Paul on Instagram.

A photo also surfaced from backstage on Friday night on the band’s current European tour with Jerry Cantrell and Metallica drummer Lars Ulrich.

In a 2014 Billboard interview, Jerry Cantrell discussed Alice In Chains flying to Dallas to be with Vinnie Paul after his brother Dimebag Darrell was shot and killed in 2004.

“I don’t remember that exact moment, but I know I got on a plane immediately. All of us, [Alice in Chains drummer] Sean [Kinney], [Alice in Chains bassist] Mike [Inez] and me went straight to Dallas to be with Vinnie and support him. We’d been through losing somebody — losing Layne — two years earlier, so we had kinda been there. It was one of the most godawful things you’ve ever heard of happening to somebody who was one of the nicest people you ever knew in your life and your friend. It’s still unbelievable.”

He also said about Dimebag, “He wasn’t any different in the center of the room with you or the center of an arena with thousands of people. He was a really genuine person. He was fun to be around. I had so many good times with him. And I had some bad times, too, where it would be about picking each other up. I’d get to see him really regularly out on the road. The arcs of our careers were fairly similar: Cowboys from Hell came out in ’90, Facelift came out in ‘90; Vulgar was ‘92, Dirt was ‘92.”