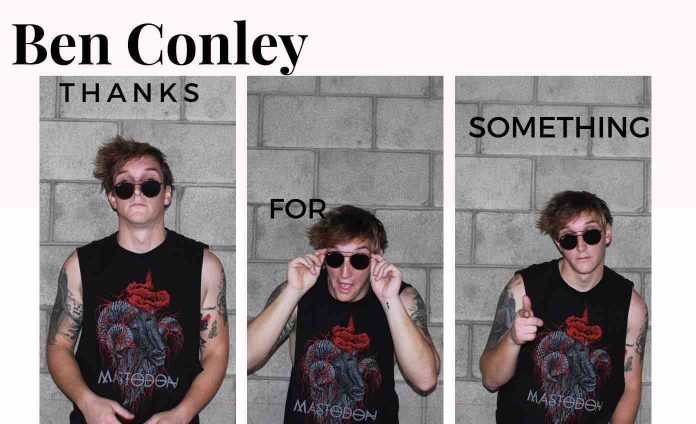 Hard, fast, and loud is the topic for today here at Alternative Nation and I wouldn’t want it any other way.

Ben Conley came through the e-mail today with a track that just simply impressed me. I really have to hand it to Ben on this. The track is an alt-punk masterpiece. Let’s get to this.

Ben is a Los Angeles-based Blues Rock/Punk Artist whose music is refreshingly bold and confessional. “Boiled down to its essential raw elements leaving only skin on the bone.” is how Ben describes his art. I love the character Ben has just based off the description alone.

Ben describes his new single as: “‘Thanks For Something’ has no time for dallying or wondering why. At just 1:12, it stands as the untethered expression of Conley’s personal struggle, splashed with trademark wit and humor.”

Ben continues even deeper on the reasoning for the creation: “This song was written a few days after a breakup. A sarcastic flip on saying, “Thanks for nothing”, this song details the hard and fast nature of the relationship and acknowledges the idealization the writer had towards his former partner.” We feel your pain, Ben. We’ve all been there. You created art out of tragedy though, and that’s what will make you continue on.

Getting to the song itself, it’s just great. What makes it great is not only that Ben did all of the instrumentation and the video work by himself, but the song is catchy and short. I could listen to it ten times over. Short songs are the future with apps like TikTok being hits. Ben gets this. Ben delivers his message, gets everything out, and (figuratively) throws his mic down and leaves onto the next gig.

The video for this track is straight to the point. Ben is in a shower and going psychotic. Ben is washing off the ex. He’s cleaning himself of all the pain that he once held onto as he has a breakdown and his voice distorts rasping out “I don’t miss you…just the idea of you.” Dark, thoughtful, and witty lyrics.

As we pulse through at a fast pace through the song, the tension starts rising. Ben is screaming at the end “Get the fuck out of my head!” as the song booms harder and harder not letting up like a boxer against a weaker opponent.

Ben is going to go far with this sound. I love the sound he has and it reminds me of the band METZ who were signed to Sub-Pop records a few years ago. I hope Ben and Metz have a tour once Covid is over. For now, I’m going to listen to this song ten or twenty more times.