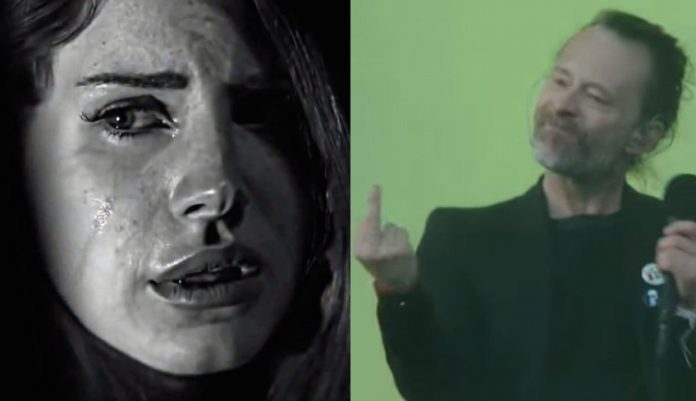 So I think these kinds of things are ridiculous. I mean, Exodus could sue us for ripping off ‘Strike of the Beast’ [on ‘Son of Evil’], Metallica could sue us for a lot of inspiration, but we never copy.

I don’t think an artist like Lana Del Rey… they would maybe get inspired but would never copy anything. It’s just not cool. And to me, if I have a song title already I would Google the song title and if there’s another band that has the same song title I try with something different.

So I’m very paranoid when it comes to that. It’s getting very tight at this point because I’ve written like 150 songs so there might be some songs that have the same title, but I try to avoid it. I try to come up with my own stuff, and it’s getting harder and harder. But you have to work hard.”

Radiohead’s publishing company, Warner/Chappell, have released a new statement regarding Lana Del Rey’s claim that the band is suing her for ripping off “Creep” with her song “Get Free.” Warner/Chappell has acknowledged in the statement that negotiations are ongoing with Del Rey’s camp, but denied that any lawsuit has been filed. Below is Warner/Chappell’s statement:

As Radiohead’s music publisher, it’s true that we’ve been in discussions since August of last year with Lana Del Rey’s representatives. It’s clear that the verses of “Get Free” use musical elements found in the verses of “Creep” and we’ve requested that this be acknowledged in favour of all writers of “Creep.” To set the record straight, no lawsuit has been issued and Radiohead have not said they “will only accept 100%” of the publishing of “Get Free.”

At a recent concert in Denver, Lana Del Rey revealed that she could be forced to remove the song “Get Free” from her new album Lust for Life due to Radiohead’s lawsuit claiming that the song ripped off their hit “Creep.”

The singer revealed the possibility during a concert Sunday night in Denver, also stating that the band want 100% of publishing for the track.

Del Rey called “Get Free” her “statement song” and “personal manifesto,” and discussed the lawsuit before performing a medley according to Consequence of Sound. “I just want to let you know,” she said. “Regardless if it gets taken down off of everything, that those sentiments that I wrote… that I really am going to strive for them, even if that song is not on future physical releases of the record.” She then played a portion of “Change,” which she also said is a very personal song for her, into a medley.

Lana Del Rey is claiming that Radiohead is suing her for ripping off their hit “Creep.”

She tweeted, “It’s true about the lawsuit. Although I know my song wasn’t inspired by Creep, Radiohead feel it was and want 100% of the publishing – I offered up to 40 over the last few months but they will only accept 100. Their lawyers have been relentless, so we will deal with it in court.”

Radiohead believe Del Rey’s song “Get Free” ripped off “Creep.” Listen to both songs below.

It’s true about the lawsuit. Although I know my song wasn’t inspired by Creep, Radiohead feel it was and want 100% of the publishing – I offered up to 40 over the last few months but they will only accept 100. Their lawyers have been relentless, so we will deal with it in court.