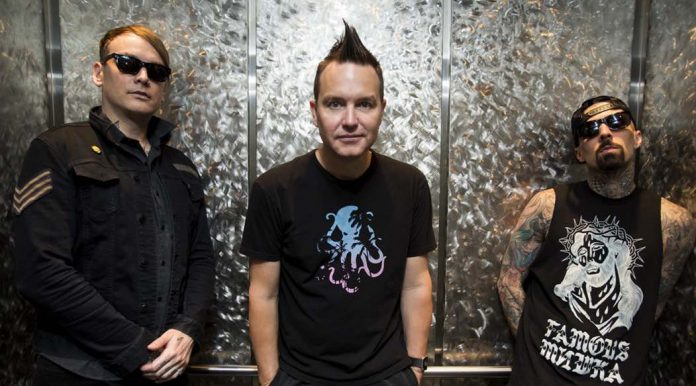 Blink-182 singer/bassist Mark Hoppus has shared photo of he and his family near the Notre Dame Cathedral after the horrific fire a couple of days ago.

“Really heartbroken over the damage to such an iconic building. We’ve had so many memories there over the years. Sending love to Paris 🇫🇷.”

blink182italia recently reported, “The last recording week for blink-182 has officially begun! I’m so stoked to see Mark, Matt, and Travis together in the studio. And Feldy is back at the helm!

Furthermore, it looks like blink’s experimental approach has been influenced by Simple Creatures’, as in a recent interview Mark explained ‘We’re trying to get away from picking up an acoustic guitar and starting a song that way. So we’ve been writing songs based around beats that Travis has come up with, or maybe just a keyboard line or one little guitar riff and building around that. This is also why we’re collaborating with different producers.

For example, Pharrell Williams brought an idea for a track that we worked on for a couple days that is very immediate, happy, punk-inspired, sing-along happy punk rock.’ Mark concluded by confirming that blink-182 is aiming for an early summer release.”

Blink-182 will perform ‘Enema of the State’ to celebrate the album’s 20th anniversary at the Back to the Beach festival in Huntington Beach, CA later this month.