U2 frontman Bono has recently been using a megaphone at concerts, a trademark of late Stone Temple Pilots and Velvet Revolver frontman Scott Weiland. Do you think Bono is ripping Weiland off? Check out the photos below, and let us know in the comments section.

Original Mighty Joe Young guitarist Corey Hickok wrote in a 2016 Alternative Nation article, “One thing that Scott became iconic for was his use of the bullhorn on stage, and there is a great story behind that. We were over at our buddy Gary Menke’s house one day, and Scott goes into the garage and sees a bullhorn.

He says, ‘I want to start playing with this!’ Some time after that, I’m hanging out at Gary’s house, and Scott is on MTV. Gary says, ‘Hey Dad, you were asking where you megaphone was, there it is!’ His Dad Dale goes, ‘What the hell? I want my megaphone back!’ Word got back to Scott, so he wrote: ‘I heart Dale Menke’ on it. Dale let him keep it.”

Bono's got his megaphone out to let you know that U2 at the BBC airs tonight! In the run up, get acquainted with the Irish group's chart history https://t.co/9n4ti8Hcci pic.twitter.com/xFNIpnzHUw

Guys guys guys! Mr. Bono was kind enough to bring his American flag themed megaphone to class to tell us about America. He deserves your respect! pic.twitter.com/UVwhmzHIs8 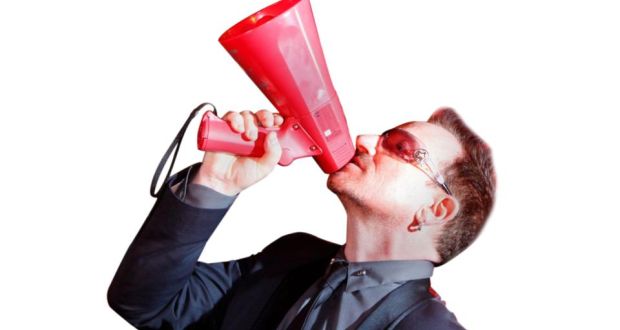