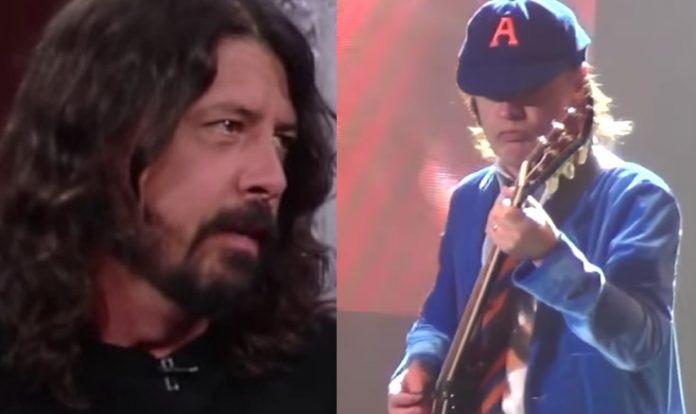 In a new Forbes interview, Foo Fighters frontman and Nirvana drummer Dave Grohl was asked what band he would still like to drum for, and his answer was AC/DC.

“AC/DC. That’s my last one, that’s it. Phil Rudd is back though. If you dive back into their back catalog, that early s**t, there was a little bit more dynamic, then they settled into the groove. That’s the thing. And it’s because of Phil Rudd. It’s AC/DC, but that guy holds the key.”

There are six degrees of separation between Dave Grohl and AC/DC, and Grohl lent Axl Rose his rock and roll throne in 2016 after he injured his leg. Axl Rose sang for AC/DC in 2016 as Brian Johnston was dealing with vocal issues. Johnson appears to be back in the band now with Phil Rudd.

“I remember when we played the Live Earth benefit 10 years ago, long time ago, more than anyone I was thinking of my daughters. She was in the forefront of my mind taking her generation into consideration. And so a lot of the issues everyone’s talking about here apply to not only us, but my children. So as a father there is some responsibility to help.”