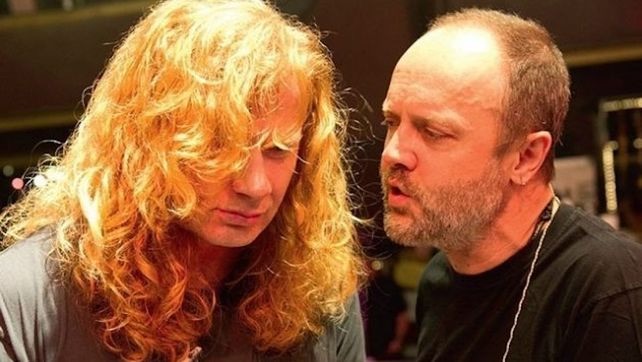 The Metallica saga is not over. Dave Mustaine, former guitarist for the band for a very “brief” moment in time, is hitting back hard and fast. The Megadeath lead-man and former satanist, has recently announced that their is more drama behind the scenes, now being revealed 40 years later, with the band than anyone ever knew.

According to a report by Ultimateguitar.com, with every new press cycle, we hear about the problems between Mustaine and Metallica. The latest revelation is about the “No Life ‘Til Leather” demo and its supposed re-release that’s been delayed for a while now.

Although Dave didn’t mention it by name, we know what he was talking about it in the new interview with Guitar.com. Or do we? We don’t actually know what Mustaine was thinking, but we are taking a leap and playing a game of “Jumping To Conclusions”. It’s a novel idea, and I’m sure one a certain reader will take, run with and make a fortune. Well, perhaps not. The game, Jumping to Conclusions, is already copy written and patented. So, good luck. The same cannot be said for Mustaine’s work, which he claims was stolen from him by Metallica during the eighties.

Mustaine, somehow, got to the issue after being asked about his reputation of being outspoken and how it impacted his career. He replied:

“You know, oddly enough that was one of the last conversations I ever had with James Hetfield because we were talking about getting back together and doing a project.

“Something had come up about the publishing discrepancy that we have been arguing about for years and years and years, and I told James, ‘I’ll do it but we’ve got to get this stuff sorted out first’. And he said, ‘Oh yeah, sure’.

“So I said, ‘Now these two songs you and me split, 50/50. Lars didn’t write on this song – you know that. I don’t know why you gave him percentages but I’m not. I’m not going to sign another deal that’s gonna confirm that because I never agreed to that’.

“And James said, ‘Well, Lars has a different recollection of that,’ and I said that’s fine; there’s his side of the story, my side and the truth is somewhere. And that blew his mind, and we haven’t talked since.

“You know, I was trying to be really friendly with him; he told me that the last three projects they did bombed, and they wanted to go back and use all the stuff that I was on, and I said sure. As soon as I said that ‘three stories’ bit, it was over!”

So there you have. Fact of fiction, you decide. And no, I am not promoting the long since terminated SyFy channel television series.