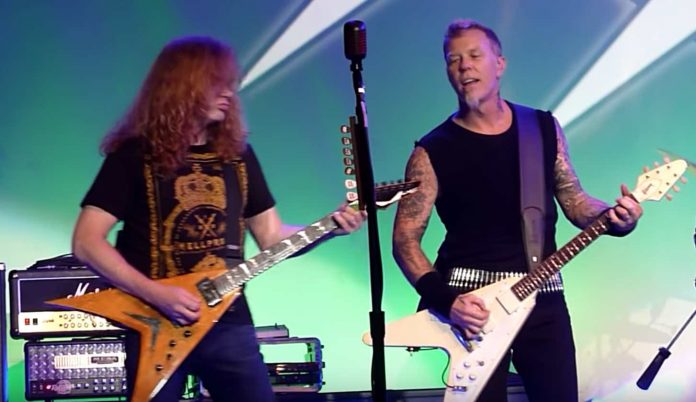 Dave Mustaine discussed his relationship with Metallica in a new Classic Rock magazine interview. “I really don’t give a fuck. And you know what? I love those guys. I sent a text message to James just a couple of days ago after he’d said that he was insecure about his playing. I said: ‘James, I love you and I really like your playing.’ He didn’t answer. Of course not. Why would he? The point is I wanted him to know that I’ve had those feelings too, but I don’t now.

I must remind you that when I joined Metallica, James did not play guitar. He just picked it up and started playing when I was in the band. But let’s be honest, James is one of the best metal guitar players in the world. So for him to have those feelings, that’s a lie, because he’s a mind-blowingly talented guy. So I just felt I needed to say something to him. I didn’t tweet it. I didn’t want anybody to know what I said. But I’m telling you because, hey, you brought it up.”

Mustaine told Joe Rogan last month about starting Metallica after Megadeth, “I think in my mind I went right into Megadeth, but at the time I was still kind of trying to digest everything that took place.

“The thing that bothered me the most was I had all my music, and I left it behind and I said, ‘Don’t use my music.’ And of course they did. They used it on the first record [1983’s ‘Kill ‘Em All’], on the second record [1984’s ‘Ride The Lightning’]. There’s parts of my music on a song on the third record [1986’s ‘Master Of Puppets’]. All the solos on the first record are mine, except that they’re just performed by Kirk [Hammett]. And [they’re] close but not the same. And he’s not a bad guitar player.”