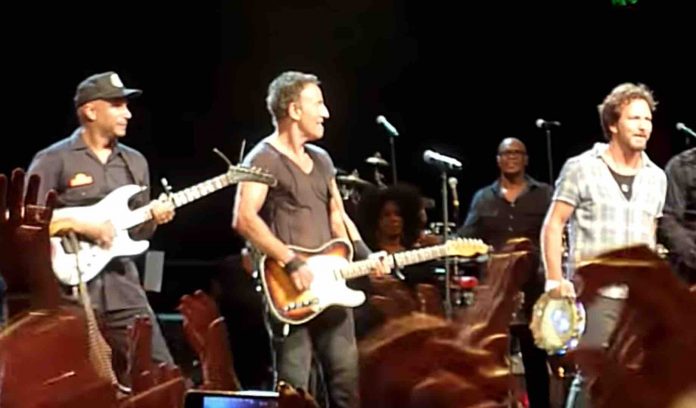 Pearl Jam singer Eddie Vedder has announced in a new video message that he will be performing at a show with Rage Against The Machine guitarist Tom Morello and other big names.

Vedder also performed at Joe Walsh’s VetsAid charity show over the weekend, performing “Porch.” MookieHawks posted on the Ten Club board, “Sorry for the long post, but have been meaning to post this story for a while, and this is perfect after last night.

I was in the Marines from 2007-2011 and my unit in Afghanistan, 2/8, was actually replaced by 2/2 in November of 2009. I have always been a massive Pearl Jam fan and brought over an iPod full of Pearl Jam and listened to it every night during my deployment. The music was my comfort during that time and it honestly got me through some difficult moments.

During the final two weeks of the deployment, a few Marines from our replacement unit 2/2, came to our base to start to learn the lay of the land. One day during that time, I walked into our battalion headquarters and saw a SPIN Magazine with Pearl Jam on the cover. After listening to the same songs on my iPod for the past seven months and not getting much outside information, seeing anything new and Pearl Jam was gold! I remember looking at the cover and seeing Ed sitting on a suitcase with the 2/2 unit sticker. What? I’m hallucinating, right? Too much time in the desert.

But of course, it was real, and of course, I had to start asking around to see, how the hell did this happen? Eventually, I was told the Battalion Commanding Officer, LtCol (at the time) McDonough was the connection. I was a low-level officer and was he literally the top-ranked officer at the base, but one night I ran into him and we started chatting. Backspacer was just about to come out and I was peppering him with questions and he was telling some great stories. Very nice guy.

I went home a few weeks later and besides it being a random and cool story, didn’t think much of it. During the Spring 2010 tour, I remember seeing them set up the broadcast to Afghanistan during the New Orleans Jazz Fest and having the 2/2 guys on the screen and I think Ed made a few shoutouts during the tour. In some ways, it was a bizarre experience, to see all the references and to literally see the guys that replaced me on the screen behind the band in New Orleans, but in a strange way, it gave me comfort knowing that my experience was not being forgotten, and most importantly, the guys that were still over there were not being forgotten.

And the best part. Fast forward a few months and I am getting ready for my second deployment and during a training exercise in Germany, I run into a guy that was in 2/2 during their Afghanistan deployment. Of course, I mention Pearl Jam and say something like, “man, it’s so cool to see all the shootouts and support from Ed and the band”. He’s like, “dude, that wasn’t even half of it”.

Turns out, Ed (and maybe the whole band) sent a bunch of critical and expensive gear over to the guys in 2/2. Gear that, in my opinion, should have been a standard-issue but because of the cost (of course) sadly was not. I have never seen this mentioned anywhere, of course not in interviews by the band, but wanted this story to be known as another example of how Ed and this band support veterans and active-duty military. As a fan and as a veteran, I have always loved the “hate the war, support the troops” philosophy that they seem to have, because that, in my opinion, is what true support for the military community is. Not BS and blind patriotism, but a critical understanding of the situation, a standing up from your beliefs, and tangible and meaningful support for those that need it most.”