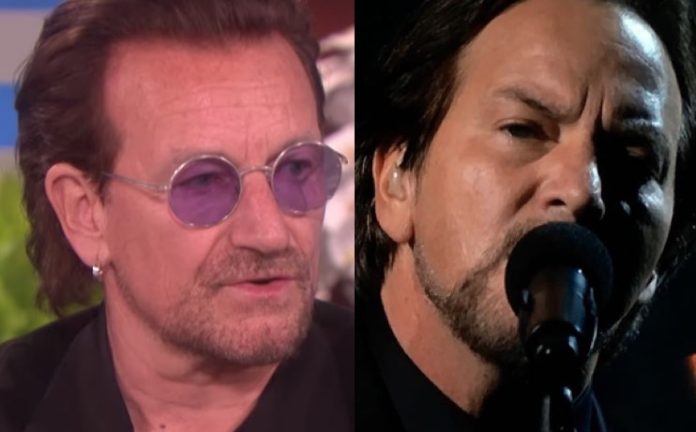 At Pearl Jam’s show in Fenway Park on Sunday, Eddie Vedder sent his best to Bono after he was forced to end U2’s show in Berlin this past weekend after a painful performance of “Beautiful Day.” Alternative Nation transcribed Vedder’s comments.

He’s meeting with Angela Merkel two days before the show, he’s working our world economy. I just want to wish him the best, and tell him we’re all thinking about him. From one Irish crowd to one Irish man, we love you B.”

Vedder had his own vocal issues in June forcing the postponement of Pearl Jam’s second show in London at the O2 Arena. In a social media statement, the band revealed in June, “It’s the first time ever having to postpone a show for this reason. Ed and the band are gutted thinking of all the folks who have traveled and made plans. Sending their biggest apologies out to everyone and huge gratitude for all for the continued support.” The show was rescheduled for July.

You can watch video of Vedder sending his best wishes to Bono at Pearl Jam’s Fenway Park show below.

‘ From one Irish crowd to another, we wish you the best B.’ – Eddie Vedder on Bono. #boston #u2 #pearljam #homeandawayshows