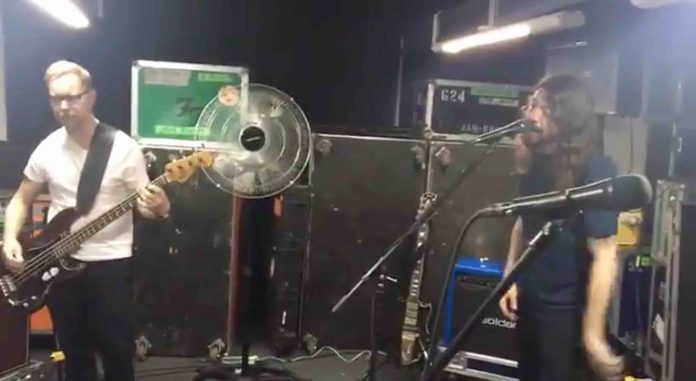 Foo Fighters have released a video where the band mashes up the rock classics “Imagine” by John Lennon and “Jump” by Van Halen.

Woodshedding for the summer tour has never felt so good….see you out there….(I’ll learn the words by then, I swear)

Thanks to Mighty Mike for the inspirado. (Oh, and Halen and Lennon, too) pic.twitter.com/VB8x6ipsmT

While at the Brit Awards, Dave Grohl also hinted that he wants Foo Fighters to perform at the Royal Wedding of Prince Harry and Meghan Markle on May 19th.

Grohl told The Sun: “I’ve saved the date. The [Brit Awards] performance was good. It’s nice to feel like a wedding band when everyone’s at tables eating tiramisu.”

Foo Fighters, who picked up Best International Group, played at Harry’s Invictus Games in 2014 – and Meghan Markle’s fiancé visited him after surgery on his broken leg.

Dave said he was “f***ing crying” at the Brits when he met Millie Bobby Brown, adding: “My daughter is a huge fan of Stranger Things.”