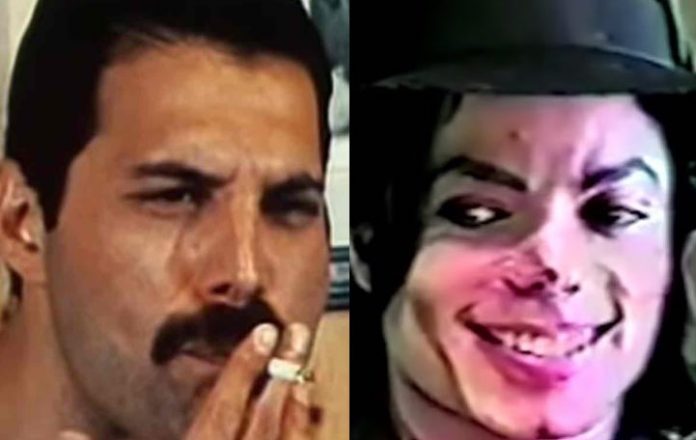 Late Queen frontman Freddie Mercury traveled to Michael Jackson’s home studio in Encino, California, in the spring of 1983 to begin work on three demos, Rolling Stone reports. They worked on material that originated during Queen’s 1982 Hot Spaces sessions “There Must Be More to Life Than This,” with Mercury encouraging Jackson to create new lyrics.

They also worked on music written solely by Jackson with “State of Shock,” and a co-written collaboration “Victory.” The songs were never completed, though they later surfaced in different forms in Mercury and Jackson’s solo careers, with Mick Jagger teaming up with Jackson for “State of Shock.” “Victory” is currently unreleased.

Mercury discussed the failed collaboration in 1987, “We never seemed to be in the same country long enough to actually finish anything completely.” He said in another interview, “He simply retreated into his own little world. We used to have great fun going to clubs together but now he won’t come out of his fortress and it’s very sad.”

Queen’s manager Jim Beach said Jackson’s bizarre behavior troubled Mercury. “I suddenly got a call from Freddie saying, ‘Can you get on over here? Because you’ve got to come get me out of this studio,’” he revealed in The Great Pretender. “I said, ‘What’s the problem?’ And he said, ‘I’m recording with a llama. Michael’s bringing his pet llama into the studio everyday and I’m really not used to recording with a llama. I’ve had enough and I’d like to get out.’”

“Fred came out of it all a little upset because some of the stuff he did with Michael got taken over by the Jacksons and he lost out,” says Brian May in Is This the Real Life.