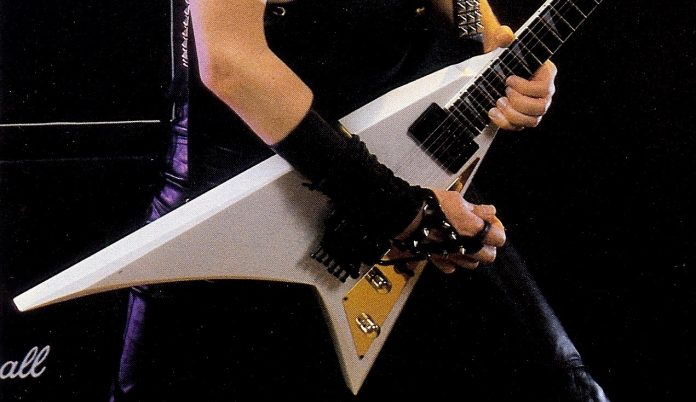 Throughout the course of rock music history, there have been few “disappearing acts” as impressive as the one committed by former Kiss guitarist, Vinnie Vincent. After being almost completely out of the public eye for the past 20 years, Vincent appeared this past Friday, Saturday, and Sunday (January 19-21) at the Atlanta Kiss Expo 2018, where he was interviewed by Eddie Trunk for his show on Sirius Radio (on the 19th), as well as answering questions and meeting fans (on the 19th, 20th, and 21st).

As the initial replacement for original Kiss guitarist Ace Frehley, Vincent (real name – Vinnie Cusano) is often credited with helping get the band back on track (right after an era which saw the band’s popularity in the US dwindle considerably), on the strength of two classic releases, 1982’s Creatures of the Night and 1983’s Lick It Up. In addition to playing guitar on both albums, he co-wrote songs that have gone on to become classics, tops being “I Love it Loud” and the title track from Lick It Up.

After exiting Kiss in 1984, Vincent eventually launched the Vinnie Vincent Invasion in 1986 – a band that arguably embraced the hair metal/glam metal look and sound more extensively than any band at the time (check out this music video for the visual/sonic proof), while Vincent’s solos were the ultimate example of “shred.” After the VVI imploded (and two of the chaps went on to form pop metallists Slaughter), Vincent reconnected with his former Kiss mates and co-wrote additional songs for their 1992 album, Revenge (including the singles/videos “Unholy” and “I Just Wanna”).

But after issuing an EP in 1996, Euphoria, and appearing at a Kiss Convention a year later, not a peep was heard from Vincent (except for some woefully unwanted publicity – and an infamous mug shot – in 2011), who during this time, was involved in lawsuits seeking money for royalties supposedly owed from Kiss. Heck, when I wrote a book about late Kiss drummer Eric Carr around that time, The Eric Carr Story, and tried to track down Vincent to see about a possible interview, any leads to contact info were virtually impossible – something unheard of in this modern day internet age. Rolling Stone even tried to make sense of Vincent’s whereabouts (and his well-being) in a 2014 article, and a Swedish TV special attempted to track down Vincent in 2017…yet also failed.

But all that changed this past weekend at the aforementioned Atlanta Kiss Expo 2018, when the mysterious Vincent finally emerged. Looking quite different from his ‘80s heyday, Vincent has put on weight and looks older nowadays (which is understandable – he is 65 years old, after all), while sporting either a black or purple blazer and trousers, plus white boots. To his credit, he did answer most questions that Trunk asked, as well as the convention’s promoter, Derek Christopher, during several sit-down chats (in front of an audience).

In addition to talking about his memories about how he joined Kiss, why he left the band (he claims to have been making only $550 a week at the time, and had to support his family), and the reason for his lawsuit with Kiss, he also disclosed that he has recently exchanged friendly emails with Gene Simmons and wants to appear alongside his former bandmate when Simmons brings his Gene Simmons Vault Experience to the Nashville area in April, and is considering writing his own book. Vincent also played acoustic versions of several of his best-known tracks, and when asked if he may be back for good, his response was, “If the fans want me back, I can’t wait.”