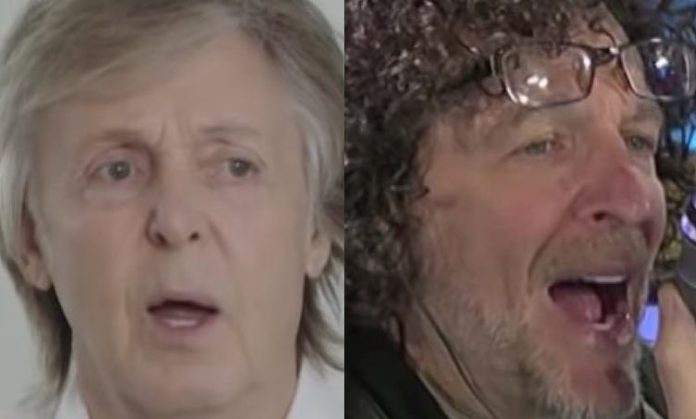 Howard Stern discussed interviewing The Beatles icon Paul McCartney in his fantastic new book Howard Stern Comes Again. He said that while it was an honor to interview McCartney, he sadly did not enjoy it because he is a perfectionist when it comes to conducting his high profile interview.

“I’ve been asked, ‘Was it fun to interview Paul McCartney, your childhood hero?’ No. There is no enjoyment in it whatsoever. The pressure is so intense, the sense of responsibility so enormous. I want to please the audience and I desperately want to please Paul.

I’d love to please myself, but I know that’s not going to happen. No matter what I ask him, no matter how well the interview goes, he’s going to walk out of that studio and I’m going to obsess over all the questions I did not ask. That’s how I feel after every interview, no matter who it is. Honestly, it’s never fun. But it’s not about fun. It’s about having a job to do, and trying to do it well.

Reading this interview back over, I think I did that. Just because it’s not ‘fun’ doesn’t mean I’m not able to appreciate it. Are you kidding? It’s mind-blowing. If someone had told me when I was a little boy that one day I’d get to sit in the same room with Paul McCartney and talk to him, I don’t know what I would have said. It would have just seemed impossible.”

McCartney appeared on The Howard Stern Show in September, and discussed his upbringing.

As a teenage boy growing up in Liverpool, England, Paul told Howard none of his peers paid any interest to him whenever he’d mention his ability to write songs. That is until he met a young man named John Lennon.

“When I met John, I said, ‘Oh yeah, I’ve written some songs.’ He said, ‘So have I,’” Paul recalled, likening it to a light bulb going off. Soon after, he and John began writing songs together, forming a bond over their mutual love of music. But it was their shared experience of having their mother pass away that brought the boys even closer.

“We both lost our moms and we loved them and nobody in the world understood except us,” Paul explained.

Together, McCartney and Lennon would go on to write some of the most influential music in history, impacting rock and roll, fashion, and an entire generation of impassioned fans.

“The thing is, you know, we weren’t trying to create a revolution,” Paul admitted to Howard. “We were just kids from a poor area in Liverpool who wanted to make some money.”

With the Beatles being the best-selling band in history, that original goal has most certainly been accomplished. But aside from the cash, Paul said he simply always wanted to write “something memorable” fans could appreciate. Making a memorable tune was crucial for McCartney, who never learned to write music and therefore had to figure out ways to quickly capture the melodies that popped into his mind. To this day, Paul still can’t read or write sheet music.

“I kind of don’t want to,” he told Howard. “I could never relate to those little dots on the page and the music I heard in my head.”

While fans and music critics alike have long praised McCartney’s songs, it took John Lennon some time before he was willing to outwardly compliment his bandmate’s songwriting talent. It happened on the set of the Beatles’ 1965 film “Help!” John was listening to a cassette of “Here, There and Everywhere,” set to be released on the band’s album “Revolver,” and told Paul he thought it was “a really great song.”

“He never complimented me like that,” Paul said. “I remember it to this day, you know, exactly where I was when he said it. It was great … it really gave me a lot of confidence in that song and in my writing.”