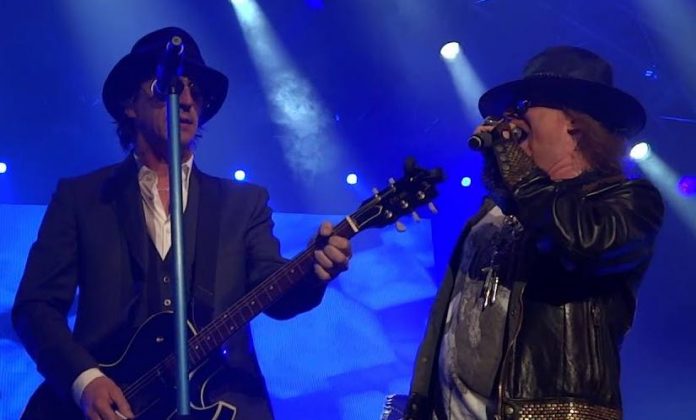 Were you surprised that when they were doing the reunion in 2016, they didn’t bother inviting Gilby Clarke back and make it more of a ‘Use Your Illusion’ lineup? Or were you not surprised at all?

“I wasn’t particularly surprised. There were a number of considerations of why it didn’t surprise me. Certain relationships weren’t so brilliant at that time, and the other thing was that, in my mind, Axl wanted to control the membership of the band as firmly as he could.

So if anything, I was slightly surprised that there weren’t more members from Axl’s solo band claiming to be GN’R.”

My big surprise was that DJ Ashba didn’t get a spot. I thought he’d get it for sure because you could see pictures of them hanging out in Vegas and all. I thought there was some sort of brotherhood going on – that was the perception.

“Come on. One top hat at a time. The fact that DJ Ashba would put on a leather top hat and go on to that side of the stage made me raise an eyebrow. But most certainly, there is only one top hat in rock and roll.”

That’s true, but I was just thinking that he had a great friendship with Axl and that he was going to be part of the band. I was actually surprised when I heard he was quitting or that he got fired. I really thought that, if anything, Richard [Fortus] might go and DJ would stay.

“No, no no no. I’m willing to speculate that DJ was probably terrified with the idea of having to be on a stage with Slash. I’m sure DJ Ashba looked at the situation and said, ‘No, I’m not going to go up there and be compared to Slash.’ Not directly.”

I know that there were a lot of lawsuits back in the day so that probably explains why Gilby wasn’t there. I’m a bit disappointed that he wasn’t there.

“If I’m going to be disappointed by somebody not being there, it’s that Steven and Izzy aren’t there. It’s a disappointment for a reunion – it’s not a legitimate and genuine reunion. I’d love to see Steven up there, that would be a great story in itself.

He’s been through some tough situations. He had a stroke in the back of a van one time. For him to be even playing, I think it’s fantastic, and I think it speaks for his spirit. If I’d been involved, I would have whoever play the main body as a set, but I’d bring the full reunion on for an encore.”

I know you hate talking about KISS, but [original drummer] Peter Criss is not the most proficient drummer in the world in terms of technique and stuff, but that drum sound on those early records is KISS you cannot replicate. You can’t be Peter unless you’re Peter, and Steven is the same thing. I hate to say ‘sloppiness’ because that’s mean, but there’s a certain style where that’s Steven, only those hands can do it.

“The one thing that Steven had that no one else had is swing. That’s a feel thing. It’s not about being sloppy or anything. Swing is how you form the groove, and no one had a greater enthusiasm for being in GN’R than Steven did. Every time he got behind that band, he was so goddamn happy to be there.

That energy and that spirit – yeah, he’s not the greatest technical drummer, we’re not going to put him in the Top 10 list of great drummers, but his heart and spirit cannot be matched.”

Remind me quickly, were you part of the Gilby Clarke transition, or were you long gone by then? Just take me back to that.

“I parted ways with GN’R in March of 1991 and then about three months later, when Izzy [Stradlin] left, I was in Switzerland at the time and he came up on my cellphone and I’m going like, ‘What the hell is Izzy calling me for?’.

He told me that he had enough and wanted to quit, and that set off alarm bells – I knew that they had some dates coming in because that was one of the last things I did for GN’R.

Izzy left three months after I did and of course Gilby had an enviable task of having to slip on Izzy’s boots and get in there and be a replacement. So I didn’t know Gilby at that point, but I did actually meet him when I was working at East End. Gilby had the same function, something to do with promo, I can’t remember exactly – it was tied to an LA TV station.”