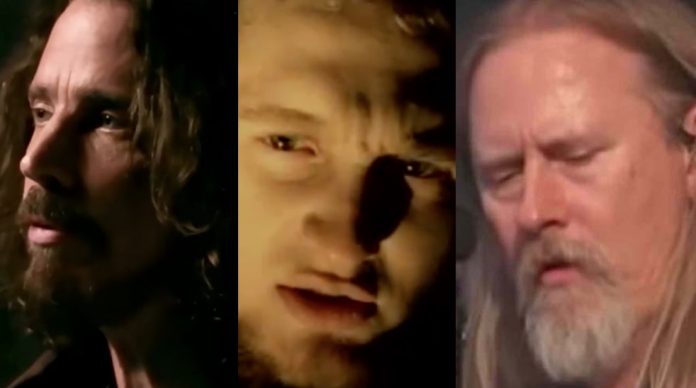 Alice In Chains singer/guitarist Jerry Cantrell revealed in a new Metal Hammer interview that AIC’s new album Rainier Fog is a tribute to his many Seattle brothers he has lost over the years, including Chris Cornell, and his bandmates Layne Staley and Mike Starr. William DuVall also discussed the loss of Cornell, and his grandmother, and how death has affected him.

“I don’t know if it gets easier, you just develop more coping mechanisms,” says William, slowly and carefully. “In some ways, it gets harder, because you’re confronting your own mortality as well. When you’re young and somebody passes, it’s such an abstract thing, but when you get older you think, ‘Wow, OK, I didn’t think that person would ever leave,’ or, ‘I thought that person had everything going on – if it can happen to them it can happen to everyone.’ It becomes much more of a direct confrontation.”

Jerry is more blasé about death, knowingly saying he’s way past halfway through his journey. “It’s just a natural part of life, we’re all going to kick it at some point – that’s a 100% guarantee,” he says bluntly. “It wouldn’t matter if we were a bunch of accountants; by the time we hit 50, some of us wouldn’t be here, that’s just part of it.”

“It’s all too obvious that this is all temporal – this is dust in a second and we don’t even know why we’re here,” adds William. “We don’t know what’s going on at all. I’m just gonna love who I love that much more, because next week the person that I’m laughing with might not be here or I might not. That part’s crazy, but it is what it is.”