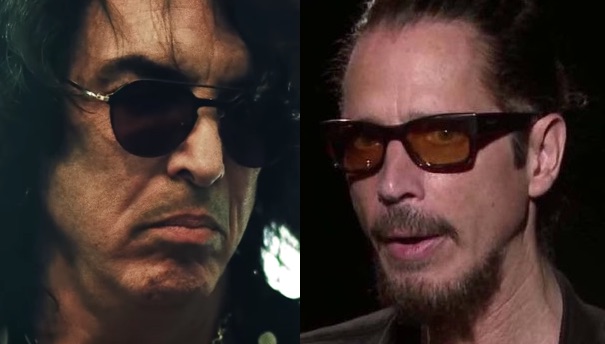 Paul Stanley tweeted, “Here’s another great video. This one shows just how deep and amazing Chris Cornell’s vocals and delivery were. What a loss for all. Please reach out if you need help. Even though you may feel it, you are never truly alone. @chriscornell.”

Chris Cornell said in 2013 that it was only a matter of time before the Seattle four-piece gets inducted into Rock and Roll Hall of Fame, and that he wanted KISS bassist Gene Simmons to induct them into the Rock Hall.

During a HBO Q&A session, Cornell was asked to name who would he like to see as the band’s presenter if Soundgarden ever gets inducted. “I would hope it is a when, as opposed to an if,” frontman replied. “How about Gene Simmons?”

Another fan asked Cornell who he’d like to induct into the Rock and Roll Hall of Fame. The singer opted for songwriter Daniel Johnston, whose records he even considers as enjoyable as the work of rock giants Pink Floyd.

“I would induct Daniel Johnston,” Cornell said. “He is a songwriter who recorded a lot of music on a boom box and produced records where the budget was ultimately the price of a cassette tape. It occurred to me at one point that I got no less enjoyment out of listening to his records than I did from a Pink Floyd record, for example. That thought spoke to me as an absolute definition of what rock ‘n’ roll is really about.”

“Inducting Heart into the Rock ‘n’ Roll Hall of Fame was an eye-opening experience. I was certainly honored, but had always had a cynical attitude about an institution like this as it pertains to Rock ‘n’ Roll in general. The fan support of all the bands inducted and their emotional enthusiasm changed everything for me.”

Here's another great video. This one shows just how deep and amazing Chris Cornell's vocals and delivery were. What a loss for all. Please reach out if you need help. Even though you may feel it, you are never truly alone. @chriscornell https://t.co/GqyeI0yQzr