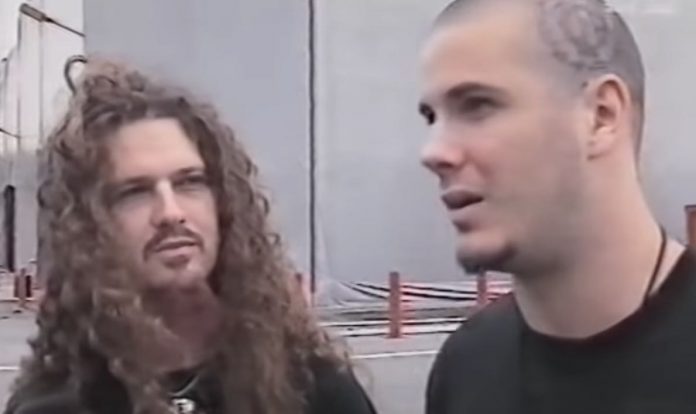 Mustaine was if he and Dimebag Darrell were “into each other’s gear” and whether they had “different philosophies on the instruments you played.”

Mustaine said, “I did not. He may have, because he was a better guitar player than I am, and he was much more into that stuff.

“Being a bandleader/guitar player/rhythm player/lead player/blah blah blah, I don’t have the availability to spend as much time working on my solos as I’d like to. But I’m also very satiated with what I’ve done with my career.

“And with Darrell, when you look at his playing, he’s a monster. He’s one of those guys that in trios, with the bottom dropping out, he was really able to keep that going.

“Of course, on the studio releases, there was an additional track going, but live, that’s the real litmus test, right? And he was a spectacle to watch.

“I actually called him up and asked him to play in Megadeth. Fate would have completely changed if I would have called him before I called Nick Menza. I said, ‘Hey, Darrell, I’m looking for a guitar player.’

“And he goes, ‘Can I bring my brother?’ And I went, ‘Who’s your brother?’ He goes, ‘Vinnie Paul! Don’t you know Vinnie Paul?’ He wanted to bring his brother and have him play with us, and I go, ‘Oh, man, I just hired Nick Menza.’

“Can you imagine what Vinnie and Darrell would have been with me and Junior [David Ellefson]? Would’ve been pretty cool.

You kind of altered the Tampa Bay metal landscape with your history with Savatage. Can you tell me about Jon and Criss Oliva and Al Pitrelli?

“I play Savatage on my new radio show regularly. When those guys come on, I actually enjoy pushing my chair back through the five minutes that they’re on. Criss was just a beautiful person, a one-of-a-kind guy.

“Shit, I can’t believe I just made this connection, but he reminded me a lot of – and even looked a lot like – Chris Adler. They’re really friendly, gentle spirits, but boy, you put a guitar in Criss Oliva’s hand, and it’s like a Veg-O-Matic tiller.

“I hung out with Jon a lot, and we were up to a lot of no good back then, but whenever Criss came around, all of a sudden it wasn’t so much, ‘Who’s got the vodka?’ He was a serious player; really raised people’s game.

“Now, Al Pitrell was another guy who came into Megadeth under very difficult circumstances. He had to fill Marty Friedman’s shoes.

“Marty had a nervous breakdown and wanted to quit. He had told me that he wanted Megadeth to be slower and more alternative-sounding, and I just couldn’t turn the band any more inside-out than I had already.

“When Al showed up, it was really funny, because if you remember what Al looked like pre-Megadeth, and what he looks like now, he turned into a star with us. I went and put him through what we fondly call Megadeth Rock School 101, and we talked about what our job is, who we are, how we play, and what band we’re in, and I watched him change and start dressing real stylish.

“He was a really remarkable player. He was able to come in and assimilate a lot of Marty’s stuff, which is very difficult, and when we parted ways and he went on to Trans-Siberian Orchestra, I thought, this is really great because he’s going to be able to continue to shine. He deserves that kind of giant production. Al’s a star.

“I think Al’s happy with his life right now, and I’m happy for him.”

As somebody who toured with Savatage and worked with Al so much, do you sense any kind of musical kinship with Trans-Siberian Orchestra?

“How do I answer this? I think the holiday has been commercialized – the music starts too soon in the year, and I have a personal pet peeve with a lot of Christmas tunes.

“Radio stations stop playing songs and start playing Christmas stuff. Or you go into a record store, and all the records that are selling are gone, and then you have a Christmas album from Miley Cyrus or something.

“Come on, who wants to hear Mariah Carey sing ‘Last Christmas’ or something again? Now, we did goof around and do some Christmas songs and made them punk. We did something on the Jimmy Kimmel show called ‘Thrashing Through the Snow.’

“If I ever did something, I would want to do it like that. Kind of metal it up.”