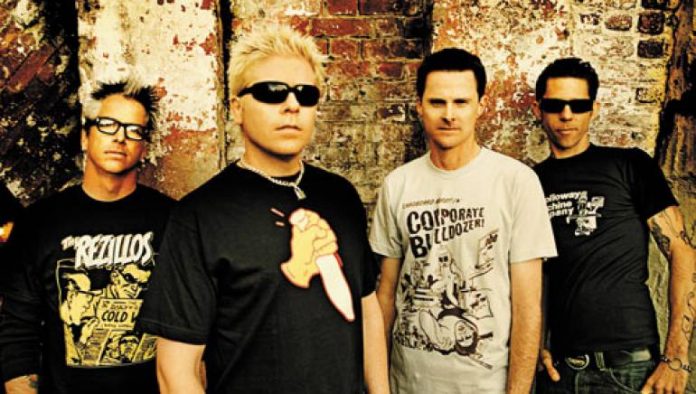 The Offspring’s Kevin “Noodles” Wasserman and Bryan “Dexter” Holland recently had a virtual meet and greet on the Austin, Texas radio station 101X.

Noodle said about the internet changing music, “Back [in the late 1990s], we weren’t sure exactly how the Internet was gonna change. We knew things were changing — the ground was kind of shaking — but we didn’t really know what it meant. But we were kind of positive about the effects that the Internet could have. I mean, things like this [discussion] — we’re talking one-on-one right now.

When I get tweets, I can talk to people right away. We could talk to ’em on our web site back in the day. Now it’s on Facebook, we can respond right away. So that stuff’s all good. Unfortunately, it almost feels like music doesn’t have as much worth as it did when we were growing up. I mean, we would all go buy vinyl and pore over the liner notes. If we wanted to hear a song, we had to pick the needle up and go back. You know what though? Vinyl’s still a thing; you can still get vinyl. Most of our records are out on vinyl, so you can still live that, if you want to. You can still pick up that needle. Wait, wait — I don’t know if we wanna be telling kids to pick up needles. Wrong message.”

Holland told Metroactive in 2012, “The Internet is something I’ve always been comfortable with because I’ve always thought of the Internet as a way to directly connect to fans. It’s what we were trying to do in little clubs as a punk band. The bands that I loved are the bands that invited the audience on stage. We did a lot of that too.

I always thought of punk shows as being really inclusive of their audience, like you’re part of an event. So when the Internet came along, you had your own webpage, your own chat room and your own Facebook — Twitter now is even more direct. It fits in very natural to what our band was already about.”