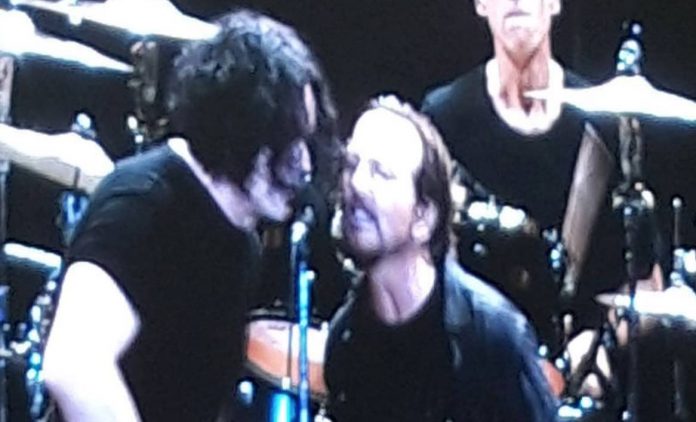 Jack White joined Pearl Jam onstage at the NOS Alive festival on Saturday night to perform “Rockin’ in the Free World”. Watch below!

Pearl Jam frontman Eddie Vedder and Jack Johnson recently fanboyed out and watched a Jack White performance. Vedder and White have performed together before, and even went to a Cubs game together. View the adorable photo below as well!

Vedder discussed his bond with Johnson in a 2008 Rolling Stone interview.

“I met his dad first through different waterman activities. I think it was a while before I met Jack. I think Kelly Slater had given me his first record. I was in the islands at the time, and that went great. It was a great record to listen to in nature. There was a point about two or three years ago when I was with Ben Harper. I said, ‘Okay, Ben, how about you and me chip in and get Jack a distortion pedal?’ And we had a little bit of a laugh, you know? But I thought about that a lot, and that was my fault that I wasn’t getting it. What he’s doing is real. As opposed to him getting a distortion box or opposed to him trying to be something else, it’s real. There are so many positive things that you get from listening to his records or seeing him live. I didn’t get it for a long time, but now I get it.”

“We were on an ill-fated canoe trip. We were sailing, and we flipped over in a channel. That was quite the little adventure. But we survived that. But, it got kind of life-threatening for a bit. The coolest thing about it was that we were floating in the water and big ocean swells, lot of wind and we’re bobbing along out there and the mast is pointed straight towards the bottom of the ocean. I didn’t know if we were going be able to upright the deal. And I looked over at Jack and thought, ‘Well, I’m in the water with Jack Johnson, so I was gonna be okay.’ And it turned out he looked over at me and I had a smile on my face, so it made him feel like we were gonna be okay, too. So it’s interesting how you can give each other confidence even though the situation is a bit dire.”

One of the best parts of being on the road is running into friends along the way. Jack and #eddievedder watching @officialjackwhitelive set side stage at @rockwerchterfestival. ? K. Johnson