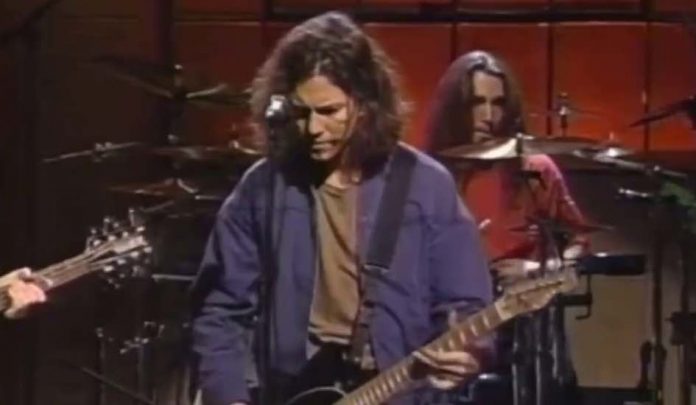 Former Pearl Jam drummer Dave Abbruzzese posted on Facebook, “I made this video after I was unceremoniously kicked out of Pearl Jam, as a farewell to the best audience, crew and band.
It’s like a time capsule in my bones still. Enjoy.”

Pearl Jam performed in Camden, New Jersey a couple of nights ago with current drummer Matt Cameron, below is the setlist via the Ten Club board.

01. Wash
02. Oceans
03. Daughter
04. Hard To Imagine
05. Animal
06. Mind Your Manners
07. Do The Evolution
08. Deep
09. Interstellar Overdrive-(Barrett, Mason, Waters, Wright) (30 seconds)
10. Corduroy
{This one is truly dedicated to someone one who got air before Jordon, Kobe or Lebron. The one and only Dr J. Julius Erving}
11. Given To Fly
{Talks about meeting Dr J. in ’96 and how enormous his hands are. Then a tirade against wealthy people who would rather build a home for themselves on Mars than save the planet we already have.}
12. Quick Escape
13. Retrograde
14. Even Flow
{Ed says it is nice to see faces out there after everyone being masked so long. He looks at Stone and says, “Nice to see your face too.” Stone had been wearing a mask for the last few shows}
15. Untitled
16. MFC
17. Not For You/Modern Girl-(Sleater Kinney) (2 minutes)
{While playing “Modern Girl” Ed talks about all the different weather and events the band has seen on this tour and when they get to Camden it was a perfect day.}
18. Who Ever Said/I Can’t Get No Satisfaction-(Jagger/Richards) (30 seconds)
{Ed relates a dream about a volcano in Philadelphia. He doesn’t know what it means but he asked Mike to play this song}
19. Eruption-(Van Halen)
20. Why Go
{Ed talks about the eroding of rights and freedoms and how important it is to vote. They put information on the screens about how to get registered. One of the most important issues are women’s right to choose. He implores everyone to vote for freedom.}
21. Porch

22. Inside Job
23. State Of Love And Trust
{Ed introduces Richie and his son Dermit (sp) who won a lottery to get a guitar and come to a show. All part of a fundraiser called All In Challenge to raise money to help people during the pandemic}
24. Breath
25. Crazy Mary-(Williams)
26. Leash
{Ed brings out some Jerseys gifted to him by a firefighter from ladder 3. Ed didn’t get to meet him that night so he wanted to talk about him tonight. Of the 24 people from Ladder 3 that went to help on 9/11 only 12 came back. Ed brings out Fran Healy (sp) and his daughter. Franks’ friend Jay played the next song on guitar so we play this one loud for you tonight}
27. Alive
28. Rockin’ In The Free World-Young