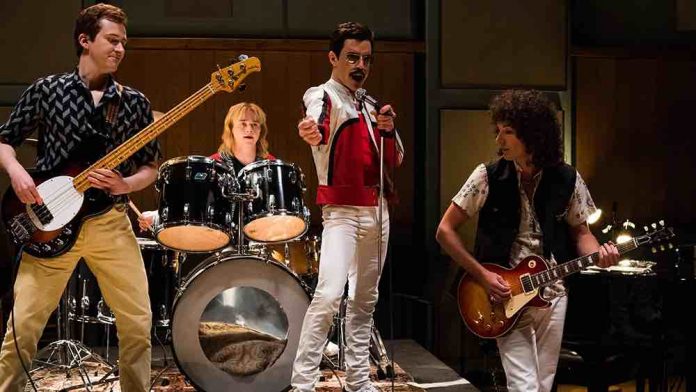 In a new Deadline interview, Queen members Brian May and Roger Taylor revealed that they had ‘concerns’ after watching rough cuts of Bohemian Rhapsody.

DEADLINE: There must have been a moment where you watched those actors performing and got nostalgic for those glory days. How close was it to how you remembered it?

MAY: It’s all great. Some of what you see on the screen was improvised … and it’s more real than anything that could have been imposed upon them. Those guys “became” us. I saw it first on the first day of filming … Live Aid. The atmosphere was electric. There’s an iPhone capture of me in the wings on that day on my Instagram feed. You can see how completely authentic that moment was — on a set which miraculously reproduced every inch of the original Live Aid stage.

DEADLINE: Were you there often during shooting the Live Aid concert performance scenes?

MAY: Yes, when we weren’t away on tour!

DEADLINE: Please describe what you felt and said to each other, after watching the movie, the dailies, and replaying those seminal coming-of-age days for a great band?

MAY: Too much to tell really. Roger and I both got concerned at certain things … and we became involved in many discussions after seeing rough cuts. But when we finally saw the rough assembly of the whole film, and sat with our partners for the first time, we ALL got uncontrollably emotional — way beyond what we’d expected, even though we’d seen the whole thing growing in front of our eyes.

TAYLOR: So much was scarily close to real — strange feelings!