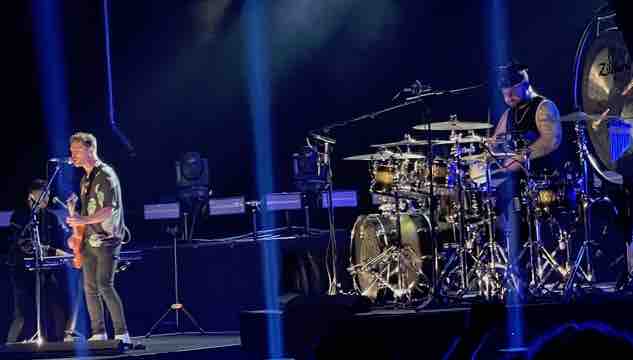 In the last decade solid new rock bands have been increasingly difficult to find. New bands either fall into the ‘mainstream rock’ category that only play the metal leaning festivals, or they simply lack enough memorable songs. Royal Blood are a rarity that are able to combine a crunchy guitar attack with great melodies and hooks.

Royal Blood performed at the House of Blues Anaheim on Saturday and played a tight 90 minute set that was the best performance I’ve seen by a young band with great songs since Cage the Elephant 10 years ago. The hard rock duo’s set never let up, with fans chanting ‘Royal Blood’ throughout the show. Frontman Mike Kerr has a charming charisma onstage, with playful banter with the crowd, including poking fun at one fan who was glued to his phone the whole show.

Drummer Ben Thatcher had a great drum solo during “Little Monster” that was a standout moment during the set, and showed the potential Royal Blood have as an act headlining larger venues in the United States. “Trouble’s Coming” is a song that should definitely be a bigger hit, with a hook that holds up to Muse’s bigger pop leaning tracks. “Lights Out” and “Figure It Out” were other highlights.

Be sure to check out Royal Blood on their current North American tour. If you’re a fan of Queens of the Stone Age, The White Stripes, Muse, and Soundgarden, it’s a show you don’t want to miss.