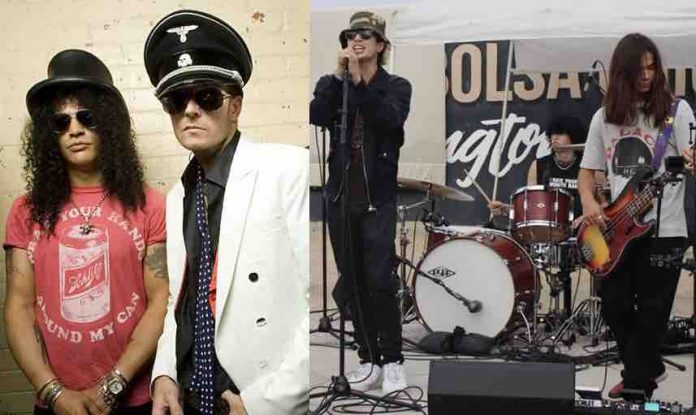 Late Stone Temple Pilots frontman Scott Weiland’s bandmate in Soi-Disant Scott Tubbs has reached out to Scott’s son Noah Weiland on social media. Noah was just reportedly fired by his band Suspect 208, with the band alleging that he is using drugs.

Tubbs told Noah, “A message to Noah – Your father was one of my closest friends for many years. I met with him a month before his passing and wish everyday since that I would have said these words to him. So I’m saying it to you. You are loved! You got this. Much love Noah. Scott.”

TeeJay410 posted on MyGNRForum.com about a Noah Weiland Instagram live stream where he claimed that London Hudson, Slash’s son, had abused hard drugs. TeeJay410 posted, “Noah Weiland did and Instagram live stream last night where he claimed London had a bad month spell on hard drugs (he went into far more details that an upset person airing dirty laundry would, but I won’t).

This isn’t necessarily a secret because London has talked about it himself, it’s why he had to leave Classless Act to try and get himself right.

The selling Slash’s guitars thing was a sort of throwaway Noah didn’t even get into deep, a user commented something along the lines of ‘London sold his dad’s guitars for drugs’ and Noah burst into laughter asking how the user knew about that, and then moved on.”