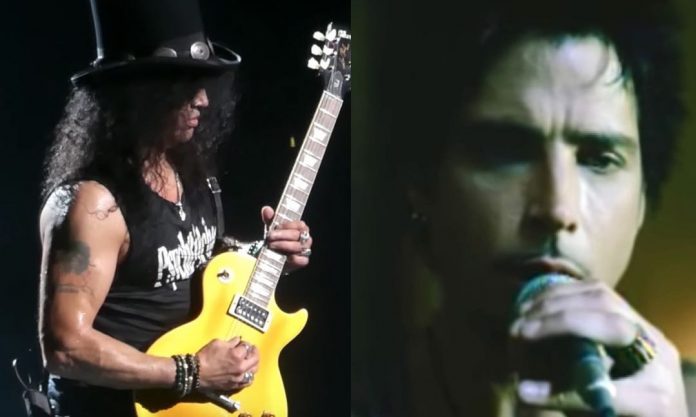 Myles Kennedy discussed working with Slash in a new Stomp & Stroll Radio interview (transcribed by Ultimate-Guitar). Kennedy revealed that he was first unsure about appearing on Slash’s 2010 solo album due to the legend that were working on it at the time like Chris Cornell and Ozzy Osbourne.

What was it like when Slash called you to join his band?

“It was really cool, he called just over nine years ago. He was working on his solo record, and he had all these amazing singers – Ozzy and Lemmy, Chris Cornell…

And he called me and he said, ‘Hey, would you be interested in singing the song on my solo record?’. To say that I was surprised that he called me would be an understatement of the decade because I was like, ‘Are you sure you want me on this record?’.

And he was really cool. He sent me this music that didn’t have any vocals on it and he said, ‘Hey man, just spend a weekend, and then send it back to me.’

So I sent him back the lyrics to what will become ‘Starlight’ and he liked it, and then we started this entire process. We’re still making music nine years later.”

Do you find it kind of a challenging working with Slash since the set is like three different bands worth of music?

“Yeah, it was really really challenging in the beginning, and I think that it really helped me evolve as a vocalist. I kind of cringe when I see a lot of the footage early on.

I just wasn’t ready at that point, I hadn’t developed certain parts of my range yet, but you know, it was kind of a trial by fire, and now it’s interesting because we are actually focused on a lot more of the material we’ve written together, so we play like one Guns N’ Roses song, we do one Velvet Revolver song, and other than that everything is off the last 3-4 records we’ve done together as a full band, so that’s been nice because obviously, those tracks are easy to pull off.”

“Yeah, I mean it comes from really just seeing how much of an incredible effect it had on my life as a kid. My mom was the person that actually pushed me to play an instrument when I was probably nine years old.

The first instrument that I started on was the trumpet. I switched to guitar a few years later. It seemed a lot easier, so the experience with the trumpet definitely gave me a leg up.

But seeing how they’ve cut the budgets in music programs and kids don’t have the same opportunities that I had when I was growing up, I thought it would be a good idea to put something together with some folks, raise money and help kids out that wanted to play or wanted to learn.

We’ve been doing that for a few years now, we’ve been able to do some cool things, it’s been very wonderful to have the opportunity to do something like that.”

I’ve heard that you are the healthiest rockstar on the map. How do you do that on tour? I can’t do that at home…

“I try, I certainly do my best to try to stay as healthy as I can… As a singer, your body is your instrument, so you got to kind of take care of it. It means that after the show, you’re not backstage drinking and smoking.

You get off the stage and basically go into silent mode. I don’t really talk much when I’m on the road, which is a total drag because I like talking with people, and people sometimes think that I’m not a nice person. ‘He’s just that quiet guy in the corner.'”

Do you find anything different about what you believe or where you stand after putting your solo record ‘Year of the Tiger’ out?

“There was a period for a long time, up until my early 30s where I wouldn’t really say I was religious per se, but I believed in the idea of a higher power.

And as time was going on, I kind of stepped away from that, and I’m still trying to figure it out. After the record was made, I started reading some things, discovering some books that really intrigued me and kind of helped me along the way.

I’ve become very interested in the Eastern philosophies, things like Buddhism and things along those lines – the idea to stay present, and that’s really been a cool part of the journey. I’ve learned a lot from that, it’s been very helpful for me.”