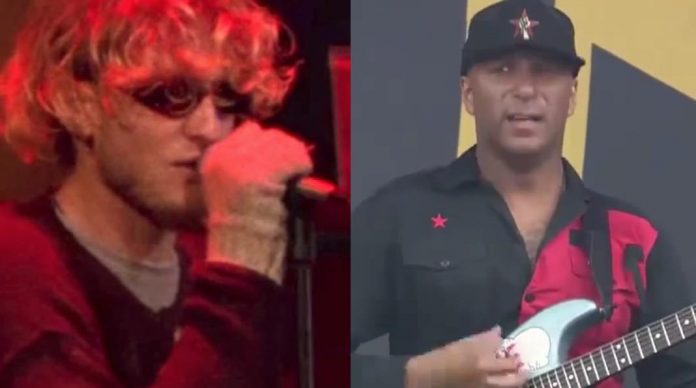 In a new Guardian Q&A, former Rage Against The Machine and Audioslave guitarist Tom Morello shot down a rumor about late Alice In Chains singer Layne Staley.

A fan asked, “Is it true you taught Layne Staley to play guitar – was he a good student?”

Morello responded, “That is not true! And I suspect he would not have been a good student… Layne was a very smart, very funny person with a great, self-deprecating humour. We would often argue about which was more metal than the other, and I miss him a lot.”

He also said about learning guitar himself, “I am a self taught guitar player. I took two lessons when I was 13 years old, hated them so much that I put the guitar in the closet for four years. I began playing at 17 because punk rock music made me realise I could do it too. I then began practising up to eight hours a day trying to ape my favourite shredders: Randy Rhoades, Steve Vai, Eddie Van Halen.

After amassing considerable technique, I realised that I did not have my own voice on the instrument, and began practising the eccentricities in my playing. At the formation of RATM I had the revelation that I was the DJ in the band – and the blinders came off. I felt like there were no sonic boundaries to what I could explore on the guitar.”

In 2013, Morello briefly commented on recording a cover of Pink Floyd’s “Another Brick In The Wall Pt. 2” in November 1998 with the one off supergroup Class of 99 for the soundtrack to the film The Faculty, which was released on Christmas Day in 1998. Morello said on his Twitter of working with Layne Staley on the project that it was “mostly sad. He was not well bless him.”

Class of 99 consisted of Layne Staley, Tom Morello, Martyn LeNoble, Stephen Perkins, and Matt Serletic. It was Layne Staley’s last ever recording session, before going into permanent exile for the final 3 years of his life. A music video for the “Another Brick In The Wall Pt. 2” single was released in January 1999 and featured new footage of all members but Staley, who was represented by live 1995 Mad Season video.