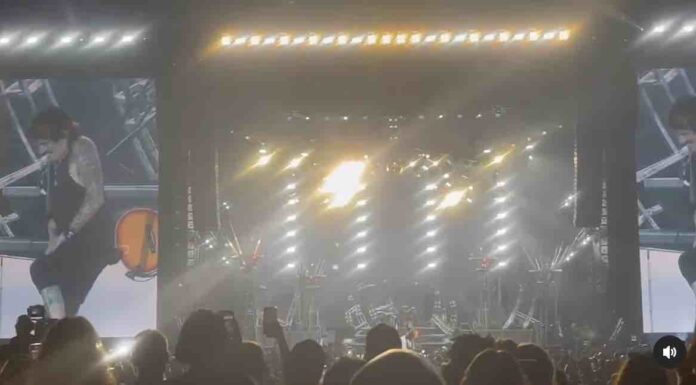 Tommy Lee showed took his wiener……dog out of his pants at Motley Crue’s show in Los Angeles on Saturday to troll fans after photos of his privates went viral online.

I always say when in doubt whip those wieners out!!! and by the way @peta no wieners were injured or harmed during this, both wieners were actually quite cozy snuggling pic.twitter.com/86vU9zT3Es

Motley Crue’s tour with Def Leppard is going great, but another iconic 80’s band has had a tough time this year.

Bon Jovi recently performed live in concert at Raleigh, North Carolina. A video footage has surfaced of Bon Jovi playing with his band at the show a few months back. It was noted how he was struggling during a rendition of the group’s hit “Wanted Dead or Alive”, as reported by Metal Sucks.

Bon Jovi struggles with the vocals

The musician, which has been rumored to be losing his voice in recent years, seems to be going through difficulties during the performance, with the camera showing the rest of the band with signs of concern.

He has been heavily criticized for the performance of the song. The performance met with some negative reactions from fans and many of them expressed their dissatisfaction.

In his review of Bon Jovi’s April 3 concert at Xcel Energy Center in Saint Paul, Minnesota, Ross Raihala of the Pioneer Press called Jon’s vocals “shockingly poor,” adding that Bon Jovi “struggled throughout the two-plus-hour show. He wasn’t just butchering the older stuff, which the band now plays in a lower key, but the fresh material as well… Quite frankly, it felt like he had forgotten how to sing.”

Théoden Janes of The Charlotte Observer was a bit kinder in his assessment of Jon’s voice at the fourth concert on the new tour, which came to Spectrum Center in Charlotte, North Carolina on April 8. In his review of the performance, Janes wrote: “Throughout the band’s rendition of 2004 promo single ‘The Radio Saved My Life Tonight’, it felt like [Jon] was searching for the right note and only finding it 60 to 70% of the time. During every chorus of megahit ‘You Give Love A Bad Name’, he seemed to unintentionally be singing a little behind the beat, and on top of that, there wasn’t much punch to his vocals — yet he inexplicably seemed somewhat out of breath in spots. On another big anthem — ‘It’s My Life’ — he once again was quite clearly veering into and out of key. And those were just three out of the first five songs.”