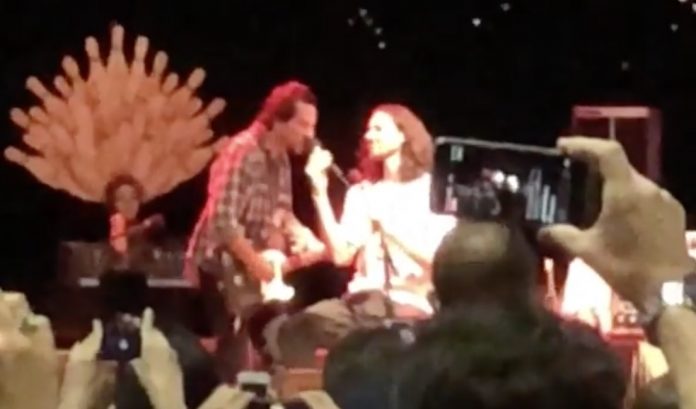 Pearl Jam frontman Eddie Vedder performed his third and final solo concert in Sao Paulo, Brazil on Friday night, and he was joined by lookalike singer Sergio Vedder for “Black.”

See the setlist below posted by Sea on the PearlJam.com forums, followed by the “Black” video.

Thanks to Fernando for Portuguese translation and summation
Walk On Music:Waving Palms
Ed Onstage 10:20
Ed Offstage 12:42

01. Isn’t It A Pity-(Harrison) {on pump organ}
02. The Ship Song-(Cave)
03. Don’t Be Shy-(Stevens)
04. Just Breathe
(Speaking in Portuguese Ed compliments the audience and says he is going to miss everyone when he goes back home)
05. Elderly Woman Behind The Counter In A Small Town
06. Wishlist
07. Drifting

08. Sleeping By Myself
(Ed comments on the fact that every day at around four o’clock the clouds come and it downpours in Sao Paulo. He hopes with this song he can bring the sun. )

(Ed goes on about how incredibly grateful he is to have Glen come down here to play with him even though it is only for three shows. Speaking in Portuguese Ed talks about hearing the song hundreds of times and that you need a song to rescue you.

(We left this song for last. We were walking around we heard so many requests for it we decided to play it tonight. Last night was Drink All Night, tonight it is Drive All Night)

(Speaking in Portuguese Ed spots Sergio in the audience and invites him up to the stage along with a friend of his. He tells the audience that Sergio is a guitar maker and he made Ed a beautiful guitar. )

(When I was a young adult I would listen to this song and wonder what it was about and what it meant and I never, ever thought that I would see it so up close….)
14. The Needle and The Damage Done-(Young)
15. Rise
16. Better Man (on parlor guitar)
17. Forever Young-(Dylan) (played on the Sergio guitar. It is for Sergio’s parents who are in the audience)
18. Man Of The Hour
19. The End
20. Parting Ways
21. Last Kiss-(Cochran)
22. Porch
23. Better Days {Ed goes into the audience}
24. Sleepless Nights-(Bryant, Bryant) w/ Glen Hansard (Ed uke and vocals, Glen vocals-busk at front of stage away from mics)
25. Falling Slowly-(Hansard, Irglová) w/ Glen Hansard guitar and vocals, Ed vocals
26. Society-(Hannan) w/ Glen Hansard
(Ed compliments the audience and tells them how wonderful it has been in Sao Paulo)
27. Smile w/ Glen Hansard. Glen electric guitar. Ed vocals and harmonica
28. Rockin’ In The Free World-(Young) w/ Glen Hansard on bass

(Speaking in Portuguese Ed brings out Patricia. She is the local tour manager and did the translations for Ed.)
29. Black w/ Sergio. (Ed plays guitar vocals, Sergio vocals. Sergio starts and sings the first half of the song. Ed sings second verse on. Sergio picks up vocals for the outro
30. Hard Sun-(Peterson) w/ Glen Hansard
(Ed has the crew come out and take a bow with him.)

"I know someday you'll have a beautiful life, I know you'll be a star In somebody else's sky, but why, why, why Can't it be, can't it be mine?" #eddievedder