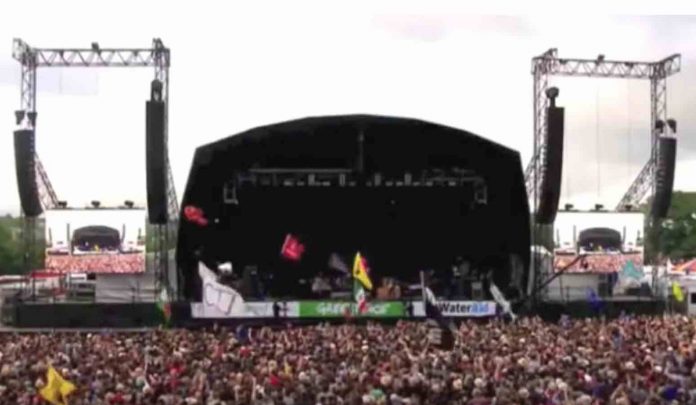 Glastonbury, Rock Im Park, Southside are perfect examples of the rock genre dominating Europe. Massive amounts of people show up to these gigantic festivals. The band Black Stone Cherry has an intriguing story. The Kentucky southern rockers boast a classic sound that is pure America. Yet, in the states they’ll play venues that are more intimate. When they make the trip across the pond in Europe, it’s a different story. Selling out arenas on a regular basis. A few years ago, they went on the road with Shinedown. The U.S. dates billed Shinedown as the headliner. The bands would switch roles in Europe though. Shinedown taking a backseat to Black Stone Cherry. Why is rock more successful in Europe than here in the U.S. these days?

The glaring decline in popularity of rock music in the U.S. is evident at award shows. It’s becoming more common for the rock awards to be given out off camera and before the show. John Lawhon bassist of Black Stone Cherry says this “We get so much of it in America. It’s like show me something else. Over Europe, they don’t get much of it so they just go nuts. I feel like it’s possible.”

What will it take to make rock music king in the U.S. again? A new fresh approach? There was the emergence of Nu-Metal in the late 90’s and early 2000’s. Bands like Korn, Limp Bizkit, Papa Roach, Deftones, and Linkin Park. Going back even further to grunge for the majority of the 90’s. Grave Grohl gave his opinion of what killed grunge in a recent interview citing shock-rockers like Marilyn Manson in the late 90’s.

Many festivals over in Europe draw hundreds of thousands of people. Perhaps the reason for these tremendous turnouts is that rock music isn’t as accessible as it is here. Matt Heafy of the band Trivium expressed this on the DOMKcast “I don’t why it’s a culture that’s just instantly into things like metal in Europe and South Africa. They don’t have the same mediums as we do hear. Like radio and other outlets to promote metal. It’s just word of mouth or it’s in the culture. I feel like the bigger US festivals are bringing a couple more heavier bands but I feel like they need to take the chance and bring in more.”

It remains to be seen what will need to take place in order for rock to be king in the U.S. again. The one consistent thing through time is that there’s always somebody with a unique perspective ready to unleash it to the world. Rock will always stand the test of time. There will be peaks and valleys along the way. Our ears will always be listening for the next big thing.