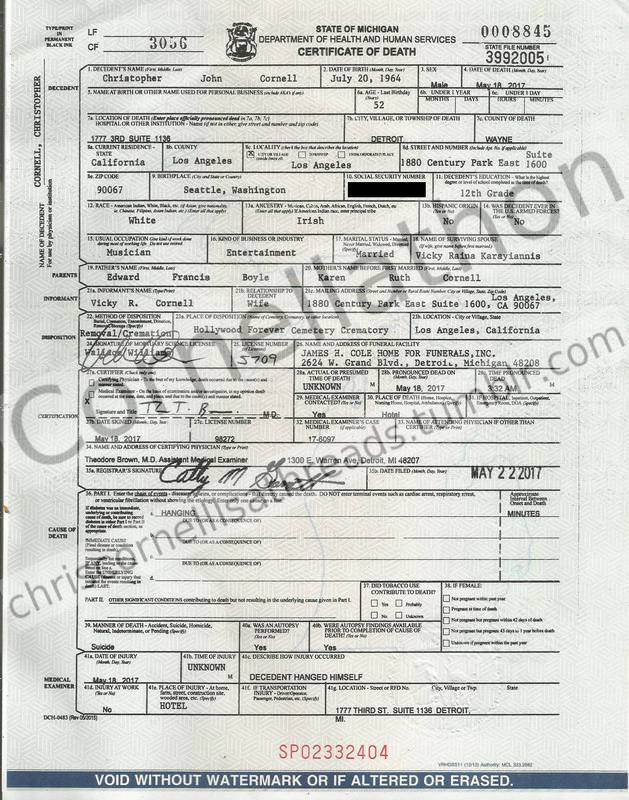 The body was that of a normally developed, adult white male appearing about the recorded age of 52 years. The bodymeasured 6 feet 3 inches in length and weighed 180 pounds. The body was cool to touch from refrigeration, rigor mortis was partially developed, and livor mortis was present posteriorly and unfixed. Clothing consisted of a previouslytorn gray t-shirt and black underwear.

The head was normocephalic. The scalp had long brown hair and streaks of gray. Facial hair consisted of a brownmustache and partial beard with gray streaks. The eyes had blue-hazel irides. The teeth were natural and in a goodstate of repair. The frenula were intact. There were no masses discernable in the neck and the larynx was in themidline.

The thorax was symmetrical and unremarkable. The abdomen was soft and flat. The external genitalia were those of an adult circumcised male. The extremities and back had no significant deformities. The wrists had no scars. Themedial aspect of the right thumb had a 1 x 0.7 centimeter red ulcer. The left knee had multiple, up to 2 centimeters,scars. The anterior aspect of the left leg had two, 3.5 x 3 centimeters, each, ecchymoses. Tattoos consisted of imagesand inscriptions on the right shoulder.

An endotracheal tube was in place and was secured by adhesive tape wrapped around the head. The skin under theadhesive tape had a red-purple discoloration. The mid aspect of the lower lip had a focal, tan abrasion. Adhesivedefibrillator pads were on the torso. The left antecubital fossa had four, 0.1 centimeter to 0.2 centimeter, needlepuncture wounds. An intraosseous catheter extended from the anterior aspect of the right leg.

A layered dissection of the anterior aspect of the neck demonstrated no hemorrhages of the soft tissues and muscles.The hyoid bone and thyroid cartilage had no fractures.

Associated with the hanging was pronounced congestion of the head and neck above the ligature furrow mark, floridpetechiae of the facial skin, and confluent petechiae of the left and right palpebral conjunctivae.

INTERNAL EXAMINATION: An autopsy was performed utilizing the normal thoraco-abdominal and posterior coronal scalp incisions. The pleuralcavities, pericardial sac, and peritoneal cavity had smooth serosal surfaces and the viscera were in their normalanatomical positions. Except for the above previously described injuries, the internal systems were as follows:

Head: No abnormality was noted in the reflected scalp, calvarium, dura, meninges, or the base of the skull. The 1600 grambrain was free of neoplastic and other focal lesions, infarcts, and hemorrhages. The cerebral vascular system wascongested.

Neck: No abnormality was noted in the cervical muscles, hyoid bone, thyroid cartilage, trachea, or the cervical vertebralcolumn.

Cardiovascular System: The 400 gram heart had a normal configuration with an unremarkable epicardial surface and a mild amount of epicardial fat. The coronary arteries had no significant atherosclerotic disease. No acute thrombi were present. The left ventricular free wall was 1.8 centimeters thick; the interventricular septum was 1.7 centimeters thick; and the right ventricular free wall was 0.3 centimeter thick. No focal endomyocardial lesions were present. The papillary muscles and chordae tendineae were not thickened, and the heart valves were unremarkable. The aorta had no significant atherosclerosis.

Respiratory System: The larynx and trachea were unremarkable. The epiglottis had focal areas of congestion. The right and left lungs weighed 1150 grams and 975 grams, respectively. The parenchyma was red-dark red and congested. No pulmonaryemboli were identified.

Hepatobiliary System: The 1750 gram liver had firm dark tan surfaces and an unremarkable parenchymal pattern. The gallbladder was unremarkable.

Hemolymphatics: The 225 gram spleen had smooth surfaces and dark purple firm pulp. There was no significant lymphadenopathy.

Alimentary System: The lateral aspects of the tongue had multiple, up to 2 centimeters, foci of congestion. The posterior aspect of thetongue was congested. The esophagus, stomach, small bowel, appendix, and colon were unremarkable. The lining of the stomach had an intact and unremarkable rugal pattern and the contents of the stomach consisted of approximately10 milliliters of tan-brown fluid. No pills were in the stomach.

Pancreas:The pancreas had an unremarkable tan lobulated pattern. Endocrine System:The thyroid gland had a normal bilobed configuration. The adrenal glands were each unremarkable with golden-yellow cortices.

Genitourinary System:The right and left kidneys weighed 125 grams and 150 grams, respectively. Each kidney had smooth cortical surfaces and normal cortico-medullary regions. The bladder was tan, smooth, and unremarkable. The prostate gland had multiple, up to 1.5 centimeters, centrally-located, tan, well-circumscribed nodules.

Musculoskeletal System: All of the muscles and axial skeleton were free of any significant abnormalities.

Routine tissue specimens were retained in formalin for one year after autopsy in accordance with the current record retention schedule.