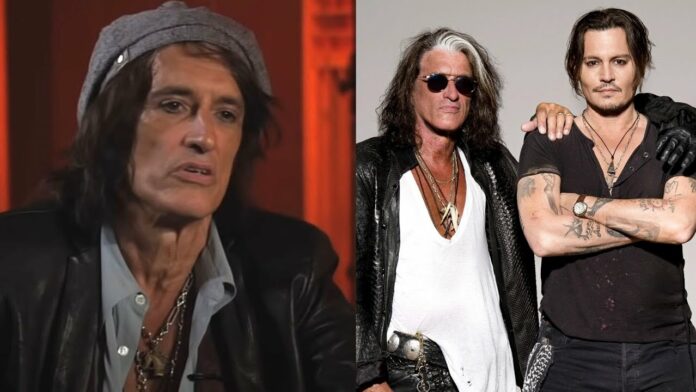 Aerosmith guitarist and co-songwriter Joe Perry, once known, with Tyler, in their more early days, as half of the Toxic Twins, didn’t have a plan B, exactly.

But one fell into place. Paul Geary, the former Extreme drummer who also co-manages the Hollywood Vampires, Perry’s side group with Alice Cooper and Johnny Depp, put together two dates in Brazil at the Samsung Blues Festival.

During a recent interview with WBUR, Joe Perry talked about the status of Hollywood Vampires, the rock supergroup formed in 2012 by Alice Cooper, Johnny Depp, and Joe Perry.

He was asked about the status of the Hollywood Vampires and he said: “We’ll probably release another single from the [second] album [“Rise’] and we have a tour booked next summer. “Heroes,” the [David Bowie] song which Johnny sang, we did a really good job with that version and it was just No. 1 on iTunes. We did it in the same studio Bowie recorded it.”

The Boston group was slated to resume its residency called “Deuces Are Wild” at the Park MGM in Las Vegas June 17. It was noted that would have begun a series of shows leading up to two New England dates in September in Bangor, Maine, and Fenway Park. The band’s 2020 Vegas residency came to an abrupt halt, due to the pandemic shutdown in America.

But the residency had been rescheduled for June and July of this year and the band members were gearing up for rehearsal in Vegas when, in late May, the lead singer dropped a bomb on the band.