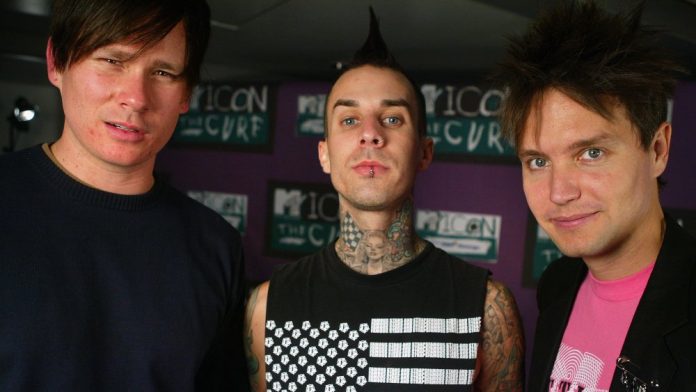 Blink-182 have been the focal point in the media more-so now than they have been in almost a decade. We can easily chalk this up to Travis Barker being more A-list than ever since marrying into the Kardashian family, but with that comes more news about his band, or former band, Blink-182.

A fan posted on the Blink-182 Reddit: “Bit of a timeline: Mark gets sick, Tom and Travis spend several hours at Mark’s house after the diagnosis, Mark and Tom both say afterwards that they now speak every single day. Skiba says next album is almost done. Album completely scrapped. AVA cancels UK tour out of the blue. Tour rumors start running wild. Fedez says Blink is playing in Italy next year and there’s secrets Mark told him but Fedez cannot reveal and spoil it.”

By all intents and purposes, one could take away that it looks like the original line-up (well, the most notable line-up that is) are back together. Also, don’t forget that Travis Barker posted a cryptic photo of Mark Hoppus’ bass guitar pedals recently.

The post would close: “Mark is in the studio and has yet to reveal what he’s working on. Tom is in the studio working on, according to Tom, ‘recording guitars, and uhhh… a live AVA album’ Skiba says publicly he doesn’t have a clue if he’s in the band anymore.”

We will have to just wait and see what is next for the boys in Blink-182. Maybe Matt Skiba is in on it as well and they’ll bring him back into the band, so that there would be two guitar players on tour rather than one. This would also take a lot of heft off of Tom DeLonge, which, may lead to a better overall relationship due to less stress in the band.