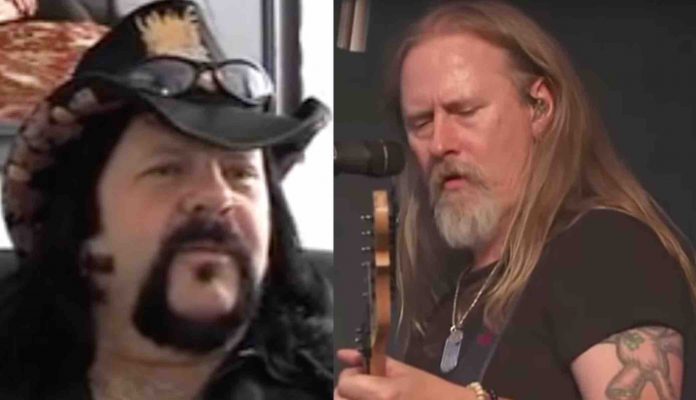 Star-Telegram is reporting that Alice In Chains, Ozzy Osbourne, and other big names were responsible for the flowers at late Pantera drummer Vinnie Paul’s public celebration of life on Sunday.

Paul’s big heart, generous spirit and love of music — traits his brother shared — were the prevailing theme of the Vinnie Paul Celebration of Life, which brought a few thousand people to Deep Ellum rock club The Bomb Factory. Fans waited in near-triple-digit heat, in a line that was nearly two blocks long by the time the doors opened, to pay tribute to the drummer.

Inside the Bomb Factory, Paul’s drum kit from Hellyeah, his most recent band, sat silently on a stage decorated with flowers from multiple rock stars and other celebrities, including Kid Rock, comedian Carrot Top (Paul was a big fan), Black Sabbath’s Geezer Butler and bands such as Megadeth, Anthrax, Disturbed, Slayer, Alice in Chains and others. Metal legend Ozzy Osbourne and his wife, Sharon, sent an arrangement in the shape of a drum.

Many of those people appeared in a series of videos with friends paying tribute to Paul, mixed in with Pantera and Damageplan music videos. KEGL/97.1 FM “The Eagle” morning personality Cindy Scull, who had interviewed the Abbotts many times during her 24-year DFW radio career, acted as MC and led the crowd in chants of “Hellyeah,” which were followed by later chants of “Pan-Ter-A!” and “Vin-nie Paul!”

“This is the weirdest and hardest thing to do for me,” Scull said, often using words that she’d get in trouble for if she used them on the air — and rather than use a bunch of hyphens, we’re simply going to omit them from quotes. “Whoever thought this would happen to Vinnie Paul? He’s such a legend, he’s the most superpositive, easygoing, greatest guy ever.”