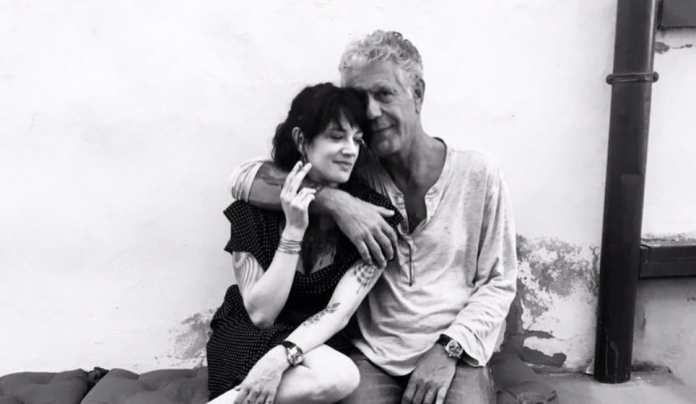 Anthony Bourdain’s 11-year-old daughter got onstage and sang — 2 days after his suicide — in a performance her mother called “strong and brave.”

Ariane Bourdain was singing with her band Sunday at an NYC venue called DROM. Anthony’s ex, Ottavia, posted a pic of Ariane with a caption personalized for Bourdain: “Our little girl had her concert today. She was amazing.”

Ottavia added that Ariane was wearing a pair of black, studded boots her father had given her.

Ottavia cryptically ended her note with, “I hope you are having a good trip, wherever you are.”

Below is a photo of the performance, followed by Rose McGowan addressing rumors that Bourdain’s girlfriend Asia Argento was cheating on him.

Our little girl had her concert today. She was amazing. So strong and brave. She wore the boots you bought her. I hope you are having a good trip, wherever you are.

Rose McGowan has written a letter about Anthony Bourdain’s death, and reports that his girlfriend Asia Argento was cheating on him after she was photographed with another man a week ago.

“Dear Fellow Humans,” she wrote in an open letter. “Sitting across from me is the remarkable human and brave survivor, Asia Argento, who has been through more than most could stand, and yet stand she does. She stood up to her monster rapist and now she has to stand up to yet another monster, suicide. The suicide of her beloved lover and ally, Anthony Bourdain.”

“I write these truths because I have been asked to. I know so many around the world thought of Anthony Bourdain as a friend and when a friend dies, it hurts. Many of these people who lost their ‘friend’ are wanting to lash out and blame. You must not sink to that level. Suicide is a horrible choice, but it is that person’s choice,” she added.

Addressing the late chef’s depression, McGowan continued, “Anthony was open with his demons, he even wrote a book about them. In the beginning of their relationship, Anthony told a mutual friend, ‘He’s never met anyone who wanted to die more than him.’ And through a lot of this last year, Asia did want the pain to stop.”

“But here’s the thing, over their time together, thankfully, she did the work to get help, so she could stay alive and live another day for her and her children. Anthony’s depression didn’t let him, he put down his armor, and that was very much his choice. His decision, not hers. His depression won,” she remarked.

Opening up about the pair’s “free relationship,” McGowan wrote that “when Anthony met Asia, it was instant chemistry. They laughed, they loved and he was her rock during the hardships of this last year.”

Continuing, she wrote that the pair “loved without borders of traditional relationships, and they established the parameters of their relationship early on. Asia is a free bird, and so was Anthony. Was. Such a terrible word to write. I’ve heard from many that the past two years they were together were some of his happiest and that should give us all solace.”