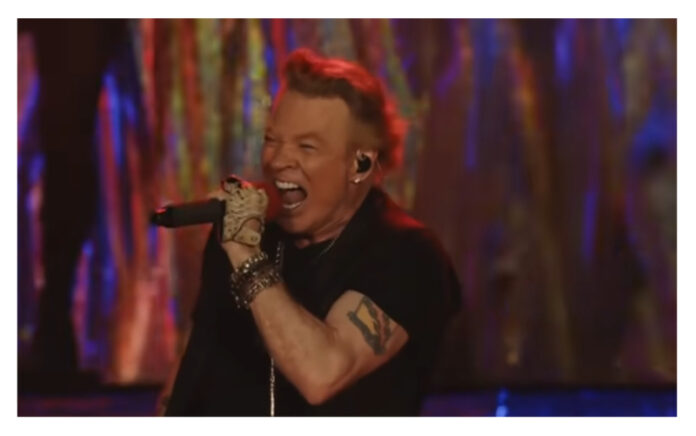 It was recently reported that Guns N’ Roses frontman Axl Rose had suffered from difficulty during the band’s recent show over in London, England. In an update to that story, fans are speculating the reason why that could have been the case. Over on the Guns N’ Roses-centric message board, MyGNRForum one user Stay. Of. Execution posted that allegedly Axl had an anxiety attack after the first show ended. However, it should be noted that this is merely a rumor and should be taken as speculation.

The poster would write: “According to an article [fellow message board poster] Blackstar posted in the London thread, Axl suffered from anxiety attacks after the first show. Hope he’s getting better!

The speculation would continue to rise rampant as the aforementioned Blackstar would respond by stating: “I mean, we know that he doesn’t rehearse much – although in recent years he has rehearsed more than he used to. But he does do vocal exercises, warm-ups, and warm-downs. I don’t think Duff would make that up. I’m also sure that even if he didn’t work with Ron Anderson systematically, he consulted him here and there. From the videos I’ve watched on this tour, it’s clear to me that he’s been trying hard with what he has; it’s just not there anymore.

While another member going by the username, IncitingChaos would proclaim: “He couldn’t physically take on the high notes tonight. It was causing pain. So he’d either skip lines or sing in his lower register. I think the best example of what he was facing can be heard at the end of Patience tonight. The outro was all over the place, but then he finished the line “this time” in what was one of his better vocal notes hit in a long time in my opinion