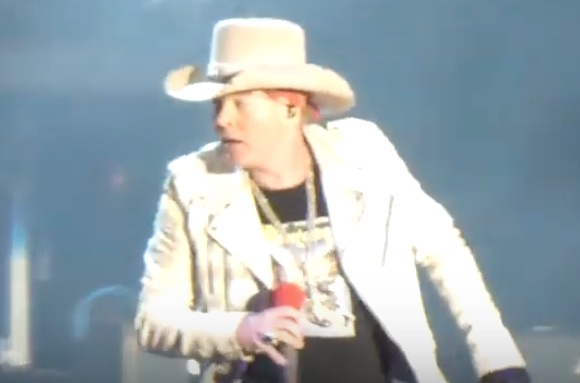 Guns N’ Roses along with their infamous frontman Axl Rose was performing recently in London, England. However, during the set, Rose would pivot and make a quick adjustment as he would admit his voice has given out. According to GN’R Sudamérica’s official Twitter account, Rose stated the following during the show. Alternative Nation would translate the original tweet, which can be seen below. Most recently, Axl Rose would ‘butcher’ this well-known Guns N’ Roses track.

“I went to a doctor to get checked out and slept here last night to make sure. So I’m going to change the songs a bit vocally, I hope you don’t mind.”

Over on Reddit and the Guns N’ Roses fans subreddit in particular, fans have been discussing this development as one fan posted: “I’m a huge GnR fan, and I’ll always f***ing love Axl, but yeah his voice is not what it used to be. I’d much rather he sing an octave down than try to hit those high notes anymore. Saw them last summer, and we drove home afterward pointing out that he was sounding like the old guy from Family Guy. Saw them in 2012 though and he was still pulling off the high notes.”

While another Redditor, going by the username of pensiveoctopus would proclaim: “Honestly, I think it’s a difficult situation for him. If his voice is worn out and needs a break, he can’t just get a new one. He shouldn’t sing and he should rest his voice, but there are thousands of fans who have paid a lot to see him and the whole band (and waited three years to do so).”

The user would continue: “Honestly I think the main issue is not owning up to it/explaining the situation (at least they didn’t mention it yesterday – can’t speak for today). I think if his voice needs a rest then shortening the set is the right choice – the rest of the band still get to do their thing and people get a show, plus fans will sing-along for the main hits – but they should have said or released a statement or something.”