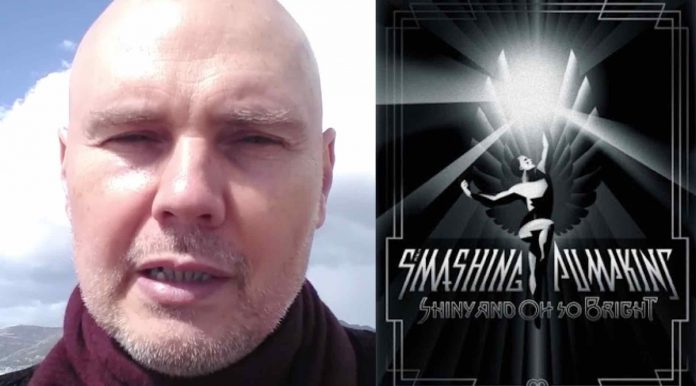 Smashing Pumpkins frontman Billy Corgan has released a new video filmed at a beach in Malibu thanking fans for the success of shows in Los Angeles and Chicago.

“Hello everyone, William Corgan here standing at the edge of the Pacific in beautiful Malibu working on new Pumpkins. I just wanted to say a heartfelt thank you to everyone for supporting this tour, it means so much to us.

Putting on second shows in Chicago and LA is a big deal. The last time I played the Forum was 1996, with the Pumpkins in this form. United Center, we have a lot of history there, where we did the second to last show before the breakup. Anyway, thanks everyone who has bought a ticket, can’t thank you enough. God bless.”

Alternative Nation first reported a few days ago about the strong first day ticket sales for the Los Angeles and Chicago shows.

The Smashing Pumpkins have tweeted, “Due to #SOLDOUT shows in both cities, second shows have been added in Los Angeles and Chicago. Tickets on sale Monday, March 5th at 10AM local time. Visit http://www.smashingpumpkins.com for tickets and more information. #SP2018 #justannounced #smashingpumpkins”

Billy Corgan wrote on Instagram, “March 5th! Tickets go onsale for 2nd shows in Chicago and Los Angeles. I guess this means exploring the idea of playing some different songs on night 2, eh? (Starla, anyone?) And thank you to all those who’ve offered their suggestions. Much appreciated. ‘Thru the Eyes of Ruby’ seems to get mentioned alot on your lists, so I’m sure @chamberdrums won’t be disappointed if we pull that our for night 2 at The Forum or the United Center (seeing as it’s one of his favorites). @smashingpumpkins #smashingpumpkins #SP2018 #shinyohsobright @jamesihaofficial @jjjschroeder”

Jimmy Chamberlin tweeted, “Incredibly grateful to all of our fans for the huge support! See you all this summer!”

Due to #SOLDOUT shows in both cities, second shows have been added in Los Angeles and Chicago. Tickets on sale Monday, March 5th at 10AM local time. Visit https://t.co/fHvbdV8HSJ for tickets and more information. #SP2018 #justannounced #smashingpumpkins pic.twitter.com/PWH4buE7kG