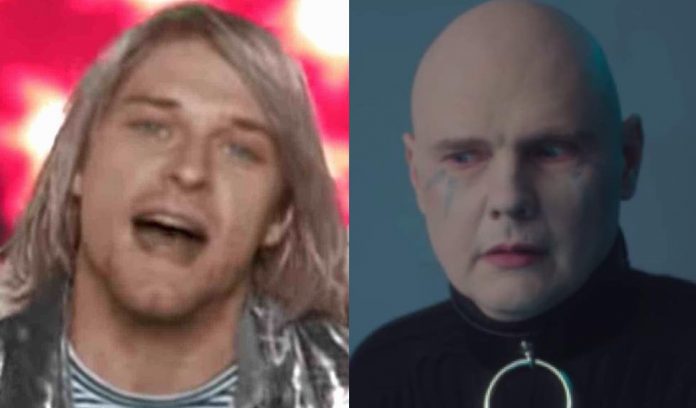 Smashing Pumpkins frontman Billy Corgan told My Chemical Romance singer Gerard Way in a new interview that he believes ‘the next Kurt Cobain’ is out there somewhere, and will blow up the system when they make their voice heard.

Gerard Way asked in an Alternative Press interview, “I’ve always felt that rock ’n’ roll is something without rules. When I think of Iggy And The Stooges specifically, I think of how onstage or in the studio making something, there are just no rules. How do you think rock fits into a world that we have today where it seems that there are a lot of rules?”

“I think what will happen is the world will start to assume that rock ’n’ roll as a cultural institution is neutered. It becomes standardized, the moves are codified and there’s really nothing more to worry about.

Every dangerous cultural movement in the history of man has been marginalized. It never lasts. Why? Because power abhors a vacuum, and chaos is a part of the human experience. You could take a child [with] two loving parents, a great school, a safe neighborhood and a blue sky. And that child at some point will go, ‘You know what? I want to see what’s on the other side of that wall.’

It’s just human nature, and we have a right as artists to explore the gray spaces. I don’t give a fuck that rock ’n’ roll as a business has decided that it’s best kept under wraps. You might be able to keep people like me or you under wraps because of expectation or legacy, but the kid who’s got nothing, who comes from nothing, he or she won’t give a shit. They’ll blow it up all over again.”

Corgan just revealed what Kurt Cobain would ‘refuse.’ Billy Corgan discussed dealing with fame in a new Zane Lowe interview on Apple Music, “I do think that I had to learn a valuable thing in that. I grew up lower-middle class, and you have to remember that if you’ve been lucky – as you and I’ve been lucky – you always have to have one eye on the fact that 99% of people will never have the opportunities that we’ve had.

So if you don’t kind of lead with, ‘Hey man, I’m the luckiest guy in the world and I feel blessed to be here,’ and then here’s my sort of wrap, the wrap becomes a thing that almost makes people feel bad.vLike, it ends up almost insulting them, and that’s something I had to learn. In essence, both things can be true.

I can complain about my stupid rock star problems while at the same time respecting that somebody who grew up as I did or worse, which is many people. Many people have had a hard go and may not have had the same opportunities that I had, and I have a little bit of balance and appreciation. You become a bit tone-deaf, you know what I mean? You’re in your $3,000 coat driving your $150,000 car and you’re complaining how the record company dropped your record…

I created a kind of a living avatar – I would go so deeply into it that I would talk that way and think that way, and then one day I would wake up and it would be over, and I would move on to another character. It was certainly inspired by people like Bowie or Iggy Pop or whatever, I just kind of took liberally from what I want. I mean, look, Robert Smith plays a character.

Now, he’s been Robert Smith for so long that he is that guy, but you’re also talking to somebody who played tabletop tennis against Robert, and he told me at one point he and his sister had won the championship for their area in England at ping pong. And I’m like… And he killed me at ping-pong, 24-1 kind of thing.”