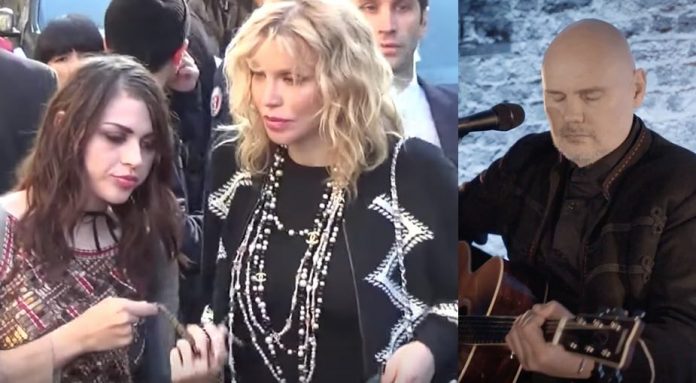 SPIN reports that Smashing Pumpkins frontman Billy Corgan isn’t accused of any wrongdoing and doesn’t appear to be directly involved in any allegations, but his name does come up in Frances Bean Cobain’s ex-husband Isaiah Silva’s new lawsuit accusing Courtney Love of trying to have him murdered.

According to the suit, Corgan had hired Silva’s friend, drummer Robin Diaz, for a Smashing Pumpkins tour, and Sam Lutfi later name-dropped Corgan in order to “threaten and harass” Diaz to reveal information about Silva. Diaz was supposed to drum on the Pumpkins’ End Times tour in summer 2015, before he was replaced by original drummer Jimmy Chamberlin who rejoined the band.

Below is an excerpt from the lawsuit:

LUFTI relentlessly threatened and harassed DIAZ stating: ‘Robin be smart…you’ve got your own family to protect and future and career and he (SILVA) isn’t going to provide that for you. Robin, listen to me. You’re playing games and I will target you…I’m pulling you into this. You have no clue what hell you’re facing…sacrifice your entire future for Isaiah, smart choice buddy, very smart that’s right, hang up like a pussy.

Make the right choice or live in hell, you decide…You’re making the worst choice of your life right now…both CL (LOVE) and Billy (CORGAN) are contacting everyone in this town…going to dedicate this entire day to making sure we’ve spoken to everyone. Is that what you want???…Do not relay anything to anyone. Give me the cell number Isaiah is currently using I’m not asking again.”

LOVE likewise threatened DIAZ stating, “I’m going to spend every dime I have and all the energy in the world to put you behind bars along with your best friend. Calls are being made. You will never work again in this town I promise you this.” “You’re about to set forth on a journey of serious pain.” “You chose the wrong side..you just walked straight into hell and you’ll pay eternally.”