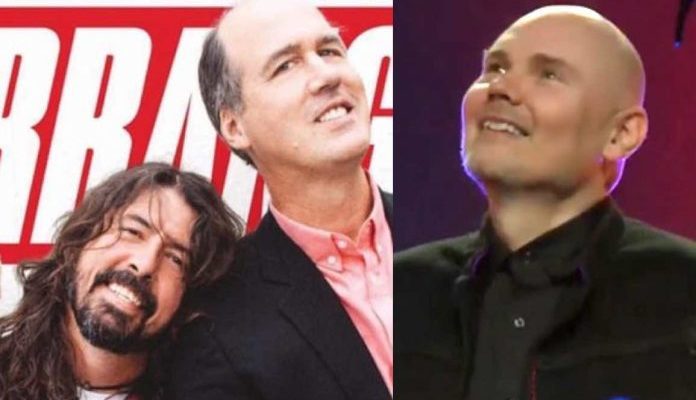 When asked where he got the money, Corgan said, “Let’s just say Nirvana will be doing a lot of touring in Saudi Arabia.”

Corgan has announced that Dave Grohl, Krist Novoselic, and Pat Smear have been dismissed, and will not be part of the new Nirvana.

He said, “Nirvana Inc. wishes Mr. Grohl, Mr. Novoselic, and Mr. Smear the best in their future endeavors.” Corgan added that they’re getting ‘generous’ severance packages, including early copies of the new Smashing Pumpkins Christmas album, and a limited edition vinyl record of his 8-hour ‘Siddhartha’ performance at Madame ZuZu’s Teahouse from 2014.

Corgan said he wants to go for a ‘full reboot’ of Nirvana, though he plans on using Bleach drummer Chad Channing as a special guest for ‘authenticity.’

Courtney Love will serve as Nirvana’s lead singer and guitarist, with former Foo Fighters drummer William Goldsmith on drums, and Smashing Pumpkins bassist Jack Bates on bass. Corgan said The Smashing Pumpkins and Nirvana will embark on a stadium tour of North America this summer, with Nirvana opening. The tour is billed as the ‘King of the 90’s Tour.’

When asked who that is referring to, Corgan said, “It’s fairly obvious.”