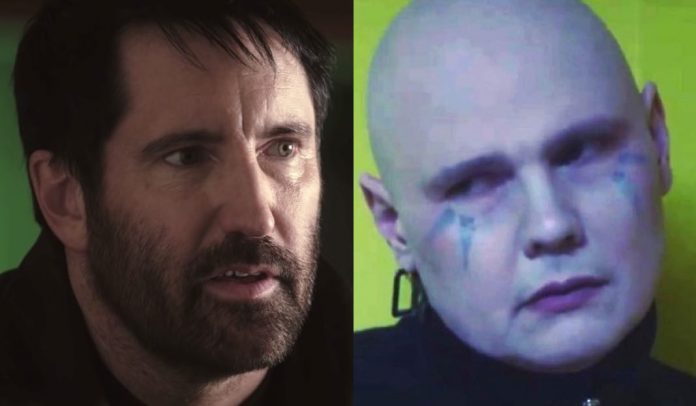 Courtney Love’s involvement with Nirvana’s Kurt Cobain, whom she married, and dating Billy Corgan of Smashing Pumpkins, remains to be one of the most famous love triangles in the music industry. Love recently took to her Twitter account and posted a picture with Smashing Pumpkins playing in the background. The picture was of the front page of the RAW music magazine which documented another hot love triangle in the 90s, Love, Corgan, and Nine Inch Nails’ Trent Reznor.

Courtney Love first met Nirvana frontman Kurt Cobain she was in a relationship with Smashing Pumpkins singer Billy Corgan. She’d flown into Chicago to be with Corgan, but ended up spending the night with Cobain.

When Cobain and Love met she was already in a romance with Smashing Pumpkins’ frontman Billy Corgan, a relationship interrupted by marriage, that would continue after the grunge legend’s suicide at the age of 27.

Previously, Love admitted she’d become fascinated by Cobain when she’d seen him perform live in 1989, and when the opportunity to meet him presented itself, she jumped at it and according to his friends, she pursued him relentlessly.

“Cobain’s legacy (…) is his daughter, Frances, who has inherited her father’s eyes, and his love for both art and music.”

Love has always admitted that she was militantly promiscuous and had earned her living on and off as a stripper, ran into Cobain once again in Minneapolis. The two ended up in bed together, and Love fell pregnant. Love revealed:

“I’d flown there to [expletive] Billy Corgan, who still had lots of hair. I didn’t even know Nirvana were playing that night. Kurt and I wound up at the Northstar.”

Love moved on from Corgan, who wasn’t always generous — he refused to pay for her plane tickets — to Cobain, whose career exploded, making him the world’s biggest star overnight. Four months later they married in February 1992.