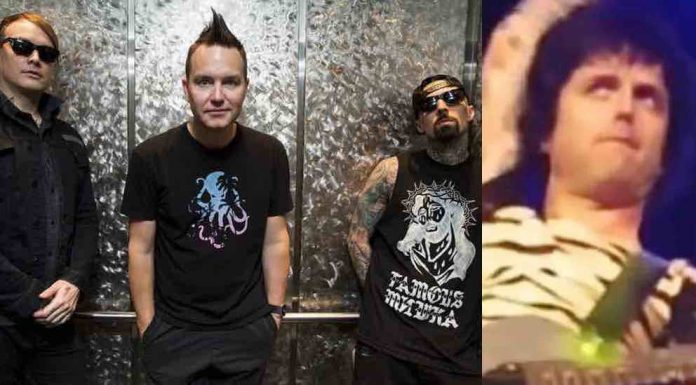 Billie Joe Armstrong wrote, “And screw it.. here’s a self too.”

Blink-182 are nearly done with their new album, with the Chainsmokers teasing a collaboration earlier this week. The band performed Enema of the State in its entirety at the Back to the Beach festival over the weekend in Huntington Beach, CA.

Tom DeLonge is reviving Angels & Airwaves for a new album and tour, and he discussed his music comeback in a new Kerrang interview.

“Music is my life and who I am, but I’m a lot more than that as well, and I got sidetracked starting my company because I had an opportunity,” he explains of how Angels & Airwaves’ new music first came about during this start-up period. “I actually created To The Stars as an entertainment company to create the multimedia parts of the Angels & Airwaves albums – it was to bill these movie projects that could be coupled with an album, so we could do these big art projects.

“One of those stories was about UFOs, and I was going to put out there some stuff that I knew had never been out there, and it would probably ruffle some feathers in a bad way in the U.S. government. I spent the greater part of a year working my way into those places within the U.S. government that manage that subject, making relationships and getting them to understand what I was doing so I wouldn’t get in their way. It’s not some big conspiracy, but it’s just a very difficult subject that they have to deal with, so I didn’t want to come out and create a bunch of uproar by putting out a hundred million dollar movie and scare a bunch of people that have hard jobs to do!”