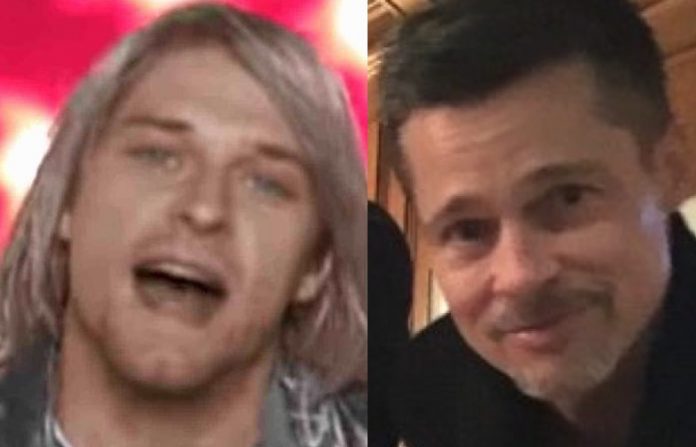 Courtney Love revealed that Kurt Cobain was more ‘beautiful’ than Brad Pitt in a new GQ magazine interview (via Chart Attack), and that he was ‘well hung.’ In the wake of the success of the Freddie Mercury biopic ‘Bohemian Rhapsody’ and the Motley Crue film ‘The Dirt,’ Love was asked about a Kurt Cobain and Nirvana biopic finally coming together, and if it happens, if Brad Pitt should play Kurt Cobain.

“Kurt had more presence and more beauty than Brad Pitt,” Love said after being asked whether Pitt should play Cobain in an upcoming biopic about the late singer’s life. “He was a leader, he was strong; in fact, he was well fucking hung, if you really want to know.”

Does she mean Pitt isn’t? Who knows. Regardless, it’s a brutal rejection for Pitt if he had hoped to play Cobain. Pitt playing Cobain really makes no sense as he is in his 50’s, and Cobain died at 27 years old, so an unknown or younger actor would make much more sense. Brad Pitt was close friends with Chris Cornell, another Grunge icon who died by suicide.

Gus Van Sant directed ‘Last Days’ in 2005, which was based around the final days of Kurt Cobain, but for legal reasons did not actually name the lead character as Kurt Cobain, despite the striking similarities in looks with lead actor Michael Pitt.