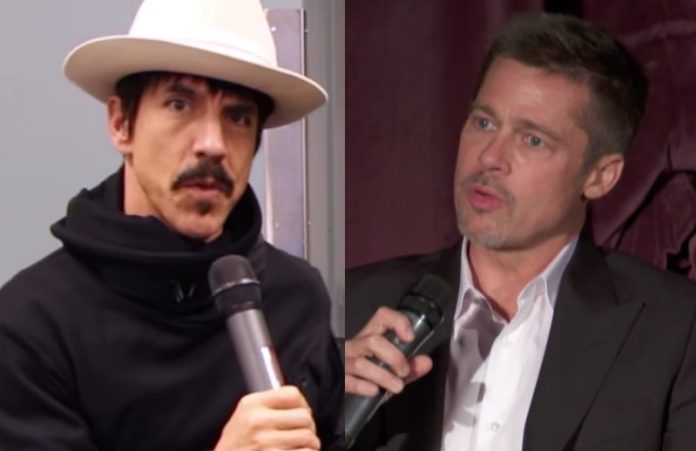 There were many rumors that Brad Pitt showed up at Red Hot Chili Peppers’ recent comeback show in Los Angeles, and it turns out they were true! Pitt attended the Silverlake Conservatory of Music gala last Saturday. He sat at a table near the stage next to artist Thomas Houseago, who made a sculpture in the shape of an owl that Anthony Kiedis and Flea gave to Mo Ostin.

Thomas said, “Owls are beautiful and mysterious creatures, they are wise, they are also very silent, but they pay a lot of attention.” You can view a photo of Pitt at the show by clicking here.

Pitt has close ties to 90’s alternative rock, including a close friendship with the late great Chris Cornell.

A photo taken years ago of Brad Pitt visiting his friend Chris Cornell at his home in Ojai has surfaced. The photo sees Pitt with Cornell’s ex-wife Susan Silver, who has managed Alice In Chains and Soundgarden over her 30 plus year career in the Seattle music scene. Silver is the mother of Cornell’s firstborn daughter Lily.

Brad Pitt was photographed at many Chris Cornell concerts over the years, and was seen at his funeral. A few days after the funeral, Pitt took Cornell’s children Chris Jr. and Toni to Universal Studios.

Cornell joined forces with Sting and Brad Pitt for a charity performance just a few months before his death in January 2017.

Accompanying themselves on acoustic guitar, Sting and Cornell (with Sting’s son, Joe Sumner, helping out on guitar), this dynamic duo were introduced by Brad Pitt before playing such hits as The Police’s “Every Breath You Take,” Soundgarden’s “Black Hole Sun,” and Audioslave’s “Like A Stone.”

The performance was to benefit the Epidermolysis Bullosa Medical Research Foundation at its annual ROCK4EB! event, held in Malibu, California, hosted by jewelry designer Alex and Ani.

Following the performance, Sting shared a pic on Twitter of himself flanked by Cornell and Pitt, writing: “Honoured to participate in the Epidermolysis Bullosa Medical Research Foundation’s ROCK4EB! event with these gentlemen. Photo by Amy Decker.”