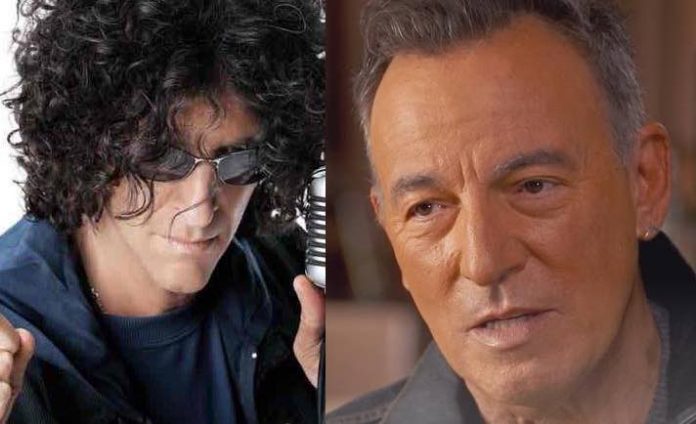 Bruce Springsteen recently told Howard Stern about a surgery he had to get, “I had to get an operation on my neck because slowly, over a period of years, I started to notice my fingers were going numb. And I had pain down my arm. … I’d get onstage, and on one of the last tours we were doing, before I had it fixed, I realized I’d get halfway or three quarters of the way through a song, and my fingers would just fatigue, suddenly. And I said, ‘Well, I can’t have that.’

And so, I had disks C4, C5 or something … it was a bit freaky, because they cut your throat, basically, open you up, tie your vocal cords off to one side … and they tell you, ‘You’re not going to be able to sing for three months.’ So I came home, I didn’t sing for three months. Then I went in my garage, and picked up a guitar … I played ‘Darkness on the Edge of Town.’ ”

Springsteen also discussed playing long concerts, “Part of it is just a work ethic of the way you came up: We used to do five sets a night. We used to play five hours a night. Now, if I play two (hours), people are gonna be disappointed. I gotta play at least three (laughs) … My problem would be, I’d play three hours, and then something wouldn’t go right on one of the songs toward the end of the show, and I’d kill myself for the rest of the night. Just beat the hell out of myself.

I’d get in the bus, on the way to the next town, and that’s all I could think about. … And so, I kind of learned to get a handle on it, because I didn’t want to keep doing that as I got older. And of course, people said, ‘Gee, how can you play so long?’ I said, ‘No, my problem is stopping. I don’t have a problem starting and playing. I have a problem stopping.’ Because … it was a purification ritual for me.”

“I grew up in the Catholic church, and so you grew up with a lot of sin, and original sin … and rituals all about rituals of purification, of cleaning out your soul and your mind. And a certain amount of that is good for you. If you take it to an extreme, it’s like anything else. It becomes your master. So … I wanted my work to be my work and my pleasure, I did not want it to be my master.

And so, when I talked about work with the (psychotherapist) I was seeing for a long time, it was sort of, ‘OK, how do I make sure I have this balance in place?’ because (a) I’ll do better shows if I’m not sort of laboring under the idea that, you know, if I don’t play that 35th song … I had to get out from under so much Catholic orthodoxy, which is the way that I was brought up. And of course I just converted that over into my music, and into the way that I played. And so a lot of … my self-created rituals were rituals of purification, and I took it too far, sometimes.”