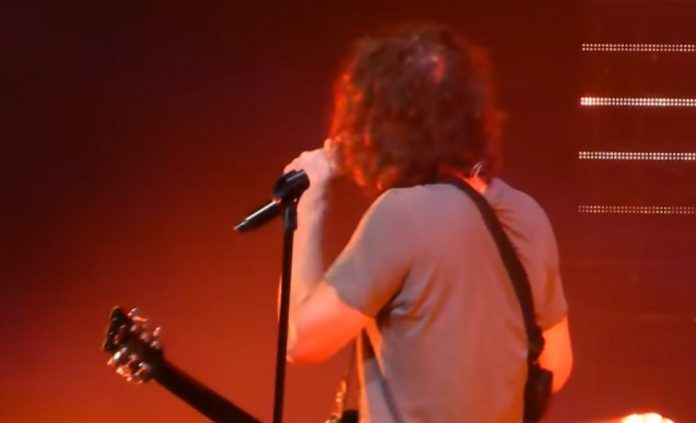 Autopsy: The Last Hours of Chris Cornell premieres on Reelz Channel on Sunday at 9PM EST. The episode explores Chris’ life and multiple theories about what could have led to his death, though it never dives into the completely unfounded murder conspiracy theories. It does touch on reports of possible head trauma.

Medical examiner Dr. Michael Hunter, who has performed 5,000 autopsies, discussed this theory on the special. Keep in mind that Hunter did not perform Cornell’s autopsy in Detroit.

“Following Chris’ death, there was an apparent call made by a paramedic on scene that said Chris may have sustained head trauma.”

The EMT call featuring the trauma to back of the head comment is then played, followed by video footage showing the back of Cornell’s head during Soundgarden’s final performance.

“It suggests that Chris acquired an injury that may have caused a concussion. A concussion can cause confusion, memory loss, and unusual behavior such as sudden mood swings, and becoming easily irritated. Did a concussion cloud Chris’ judgment, and did it contribute to his death?”

He later said, “I’m doubtful whether there was actually a head injury at all. The images from Chris’ final concert are inconclusive due to the quality of footage and the lighting condition. It’s also common for scene responders to suggest injuries that upon further examination don’t exist. In addition, there is no mention of it in the autopsy, so on that basis alone, I can discount head injury as a contributing factor to his death.”

Chris Cornell’s widow Vicky discussed a head wound paramedics noticed on her late husband the night he died in a May 2018 Detroit News article.

“My husband had no intention of leaving this world,” she said. “He did not have control of his faculties due to toxicology, perhaps even exacerbated by other factors, including a head injury, which was referenced in two EMS reports that were left out of the autopsy report.”

An emergency technician is heard on medical dispatch audio referencing a gash in Chris Cornell’s head. Also, a written report by the crew from DMCare Express, the ambulance company owned by the Detroit Medical Center, stated: “Laceration to back of skull. Minor bleeding noted upon crew arrival.”

Nothing in the autopsy report reflects a head wound.

“You can clearly see a gash or at least a visible big bald spot in pictures and video footage. It was confirmed by the band and crew — they said they saw it at the show and not at sound check,” Vicky Cornell said. “You can’t tell people there was no laceration when it’s documented, and we can all see it.”

Vicky Cornell said she believes the wound happened after sound check because she said his bandmates didn’t notice anything wrong before then.

Vicky believes a combination of factors led to her husband’s death.

“If you add it all up, he was on these prescription drugs that should have never been prescribed,” she said. “It caused a relapse…

“I think it was, unfortunately, the perfect storm, a combination of factors that made him go manic. Had the medical examiner looked at all these factors, maybe they wouldn’t have concluded it was a suicide in just an hour and a half.”

Chris Cornell had a bald spot that was visible at times for several years where the apparent head wound may have been.