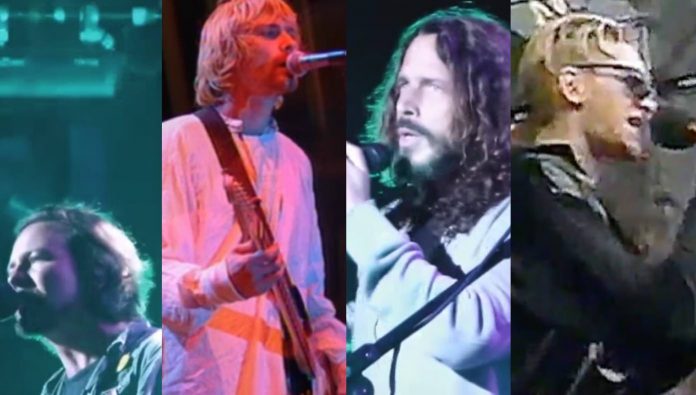 Chris Cornell’s widow Vicky has revealed that her late husband was the ‘chief architect’ of the Grunge movement in a new Instagram comment.

Alternative Nation writer Lauryn Schaffner echoed this sentiment in a January 2017 article titled ‘Why Chris Cornell Is The King Of Grunge.’ Below is the article, where Cornell is referred to in the present tense as he was still alive. We sorely miss writing about him in that context:

If there is anyone who deserves the current title of the “king of Grunge,” or “king of rock and roll,” – it’s Chris Cornell.

Perhaps one of the most distinguishable voices in rock and roll history, Chris Cornell has outdone his contemporaries in several ways.

First and foremost, his range. It’s incredibly extensive, and he implements it into many of his songs by growling deeply and belting high. “Beyond the Wheel” by Soundgarden is a great example of this, especially the live version. While Kurt Cobain, Eddie Vedder, Scott Weiland, and Layne Staley were the other main signature voices of the Grunge era and all have their own distinct vocal styles, Cornell’s range and crisp sound make his the most extraordinary.

Not only is he an outstanding singer, but a gifted and poetic songwriter. From social issues to sweet songs about his daughter and family, none of his verses sound forced or nonsensical like many other singers.

He Put Grunge On The Map

Lastly, his success with multiple projects. He founded Soundgarden in the mid-80’s and they got a major label deal only a few years later, ultimately making them the first band to establish the Seattle Grunge scene, contrary to the arguments of many Nirvana fans. In 1990 he also formed Temple of the Dog to honor the late Andy Wood of Mother Love Bone. They put out one self-titled record in 1991.

His Second Act With Audioslave

After five studio albums, Soundgarden broke up in 1997, and Cornell pursued a solo career. He put out Euphoria Morning in 1999, and then founded the supergroup Audioslave with members of Rage Against The Machine in 2001. Audioslave’s overall vibe was not as dark as Soundgarden’s, but instead was energetic and aggressive rock and roll. Cornell utilized much more distortion in his singing to give the sound a more raw style, as heard in songs like “Cochise.” The pounding riffs and his iconic vocals established Audioslave as one of the most popular bands of the 2000’s. They put out three records before calling it quits in 2007.

He’s Still On Top Of His Game

After his split with Audioslave, Cornell put out two more solo records: 2007’s Carry On and 2009’s Scream. In 2011, he released the popular live album Songbook, which featured his acoustic solo performances that he still does to this day. Soundgarden reunited in 2010, and went on tour in 2011. 2012 saw the release of King Animal.

Since 2015, Chris Cornell has done more for rock than any musician in years. He fronted Mad Season’s Sonic Evolution reunion show in Seattle, he put out another solo record, Higher Truth, in the fall of 2015, touring extensively behind it for the next year, until he went on tour with Temple of the Dog in the fall of 2016 to honor 25 years of their sole album. With only eight dates, the tour sold out in minutes.

Additionally, A series of Soundgarden festival performances were announced toward the end of the year for 2017 in which will also feature bands like Metallica, Def Leppard, and Korn. Last week saw Audioslave’s first performance in twelve years, when they performed a reunion set at Los Angeles’s Anti-Inaugural Ball. And finally, Soundgarden plans to release a new album at the end of 2017.

Cornell has also done collaborations over the years with artists like Slash, Carlos Santana, Zac Brown Band, and more over in recent years.

Chris Cornell has explored various styles of rock music throughout his career, and he has made it clear that he isn’t finished yet. With over fifty singles at 52 years old, his voice, which is still going strong, prove that he is Grunge and rock’s modern king.